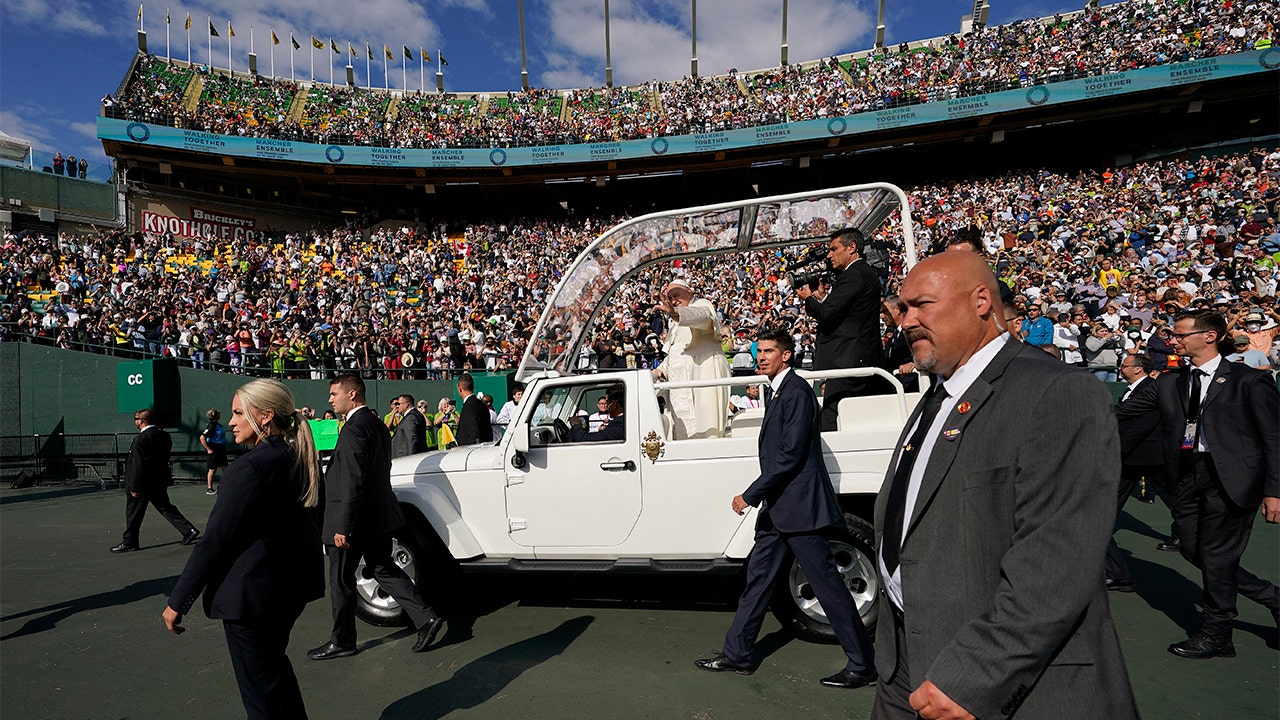 Pope Francis oversaw a mass in Edmonton, Canada, on Tuesday as part of his apostolic journey.

The pope was dressed in vestments made by an indigenous artist and carried a handmade crozier to Mass, where he delivered a homily that reflected on the historically tumultuous relationship between the institutional Catholic Church and Canadian indigenous communities.

Celebrating a pontifical Mass, Francis was called to deliver the homily, a reflection on the Scripture read at Mass, in which he spoke about the elderly, the transmission of the Christian faith through the generations and the importance of remembering the sacrifices of the ancestors.

“Those who have gone before us have transmitted to us a passion, a strength and a longing, a flame that is up to us to rekindle,” Pope Francis said. “It’s not about preserving the ashes but about rekindling the fire they lit.”

POPE FRANCIS DESCRIBES THE PRESSURES OF THE PAPACY: ‘SOMETIMES, IT FEEL LIKE IT IS NUMB’

“The grandparents who came before us, the elders who had dreams and hopes for us, and made great sacrifices for us, ask us an essential question: what kind of society do you want to build?” the Pope asked the audience.

Pope Francis celebrated Mass at Commonwealth Stadium in Edmonton before an audience of approximately 50,000 participants. The Mass is the centerpiece of Catholic theology. It is a sacrament in which the faithful gather to receive the Eucharist, which Catholics believe to be the actual body and blood of Jesus Christ.

The Mass was notably progressive in the context of the pope’s trip, which has been called a pilgrimage of apology: the bishop of Rome apologized on Monday for the mistreatment and abuse of native children during the period of Christianization in Canada.

“Although Christian charity was not absent, and there were many high-profile cases of devotion and care for children, the overall effects of the policies linked to residential schools were catastrophic,” the pope said in a formal apology to indigenous communities on Monday. .

More than 150,000 indigenous children were separated from their families and placed in residential schools between 1881 and 1996. The schools were overseen by both missionaries and the Canadian government. Several children were reportedly starved, beaten and sexually abused.

The pope stopped short of condemning the historic Catholic missionaries in Canada, saying instead that while many Catholics had noble intentions and helped the people they were meant to serve, “our Christian faith tells us that this was a disastrous mistake, incompatible with the Gospel of Jesus”. Christ.”

While a large part of the modern indigenous community is Catholic, the church remains controversial in secular discussions.

The Pope’s Mass was intended to bring those damaged in the past or who felt ignored by the church back into the broader Catholic community.

Canadian leaders have been aware of the many children dying in schools since 1907, but the incidents drew more attention after last year’s discoveries of what appeared to be unmarked graves in or near former residential schools.

Thousands of tickets to the Mass were reserved for indigenous survivors from residential schools. Indigenous leaders at Treaty 6, the place Francis is visiting in Alberta, said they were overwhelmed with requests from survivors who wanted to attend the event.