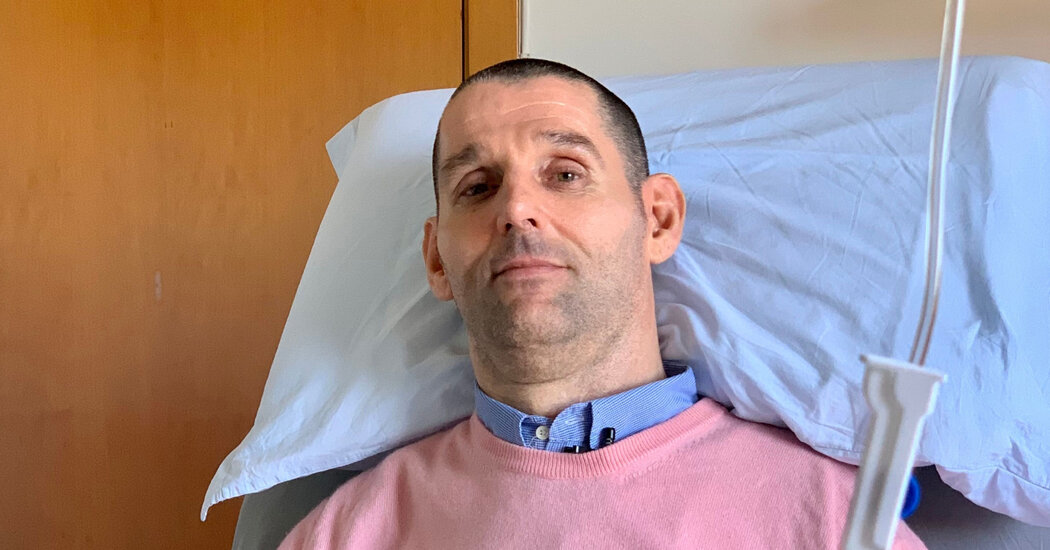 ROME — For more than a year, media reports have kept Italians up to date on the travails of a 44-year-old man known only as “Mario” who was seeking to end his life via physician-assisted suicide. Paralyzed 12 years ago in a traffic accident, “Mario” faced a series of legal, bureaucratic and financial obstacles in his search for death.

On Thursday, “Mario”, identified for the first time by his real name Federico Carboni, ended his life, becoming Italy’s first legal assisted suicide, at his home in the central Italian port city of Senigallia.

Mr. Carboni, a single truck driver, was surrounded by his family, friends and people who had helped him achieve his goal, including officials from the Luca Coscioni Association, a right-to-die group that helped Mr. Carboni during the last 18 months and announced his death.

“I cannot deny that I regret having said goodbye to life, it would be false and a liar if I said otherwise because life is great and we only have one,” the letter said. “But unfortunately it was.”

Mr. Carboni fought back even as his health deteriorated, Ms. Gallo said. “Federico wanted to exercise his right to free choice in Italy, and he was aware that his resistance would be a right, a freedom, exercised by all,” she said.

Carboni’s case underscores a number of contradictions and limitations in Italian law that right-to-die activists have challenged for decades in a country that is home to the Roman Catholic Church, which wields significant influence on bioethics.

An Italian court ruling has declared assisted suicide permissible in Italy under certain limited circumstances, but there is no legislation enshrining the practice, which Carboni said caused delays.

If they can, terminally ill Italians can travel to Switzerland to end their lives, but it is an expensive and, in most cases, physically challenging journey.

Marco Cappato, the treasurer of the Coscioni association, said that when Mr. Carboni first contacted him two years ago, he had planned to go to Switzerland to end his life. Instead, he decided to stay in Italy. “These two years of stubbornness and determination” allowed Mr. Carboni to pride himself on being “the first person in Italy to obtain medical assistance for a voluntary death,” said Mr. Cappato.

In 2017, the Italian Parliament passed a law giving adults the right to decide their end-of-life medical care, including the terms on which they can refuse life-saving and life-sustaining treatment, including artificial nutrition, hydration and ventilation.

In a landmark 2019 ruling, Italy’s Constitutional Court said that assisted suicide could not be considered a crime as long as certain conditions were met.

The court had been asked to rule on the indictment of Mr Cappato, who, in 2017, had helped a blind quadriplegic man on life support to a Swiss clinic that provides assisted suicide. Mr. Cappato was charged in a Milan court with complicity in suicide, which carries a sentence of up to 12 years.

The Constitutional Court ruled that in some cases assisting someone could not be considered a crime as long as the person requesting the assistance met four conditions: they had to have full mental capacity and suffer from an incurable disease that caused severe physical or mental anguish and intolerable. They also had to be kept alive by life-sustaining treatments.

The man Cappato helped, Fabio Antoniani, known as DJ Fabo, met the conditions so that Cappato could not be charged with any crime.

The court has urged the Italian Parliament to pass legislation incorporating these principles, and lawmakers are debating one, but until then the court’s ruling is legally binding.

Even with that precedent, Mr. Carboni fought for access to physician-assisted suicide. He was forced to repeatedly defy the health officials of the court where he lived, so that he could be visited by doctors and members of the regional ethics committee who could check the state of his health and mind and finally sign his plan, which he adhered to. to the ruling of the Constitutional Court.

Mr. Carboni’s case reflects a legislative vacuum in Italy when it comes to these issues.

Earlier this week, Fabio Ridolfi, a 46-year-old man who had been paralyzed for 18 years, died in hospice care after his request for assisted suicide dragged on. After lobbying for months, even broadcasting a heartbreaking video last month asking the state to help him die, he refused further treatment. He died on Monday.

The Roman Catholic Church strongly opposes assisted suicide and euthanasia, which it has called “inherently evil” acts “in all situations and circumstances.” Pope Francis has reiterated this position on numerous occasions, although it has been more nuanced when it comes to aggressive medical treatments.

Even the National Bioethics Committee, which reports to the government and the medical establishment on a variety of issues, was unable to reach a consensus opinion when examined the problem A few years ago.

A law that would allow some cases of assisted suicide in line with the Constitutional Court ruling was approved by the Chamber of Deputies earlier this year (with just over half of the 630 Chamber legislators present to vote), and it is now being discussed in the Senate.

Mr. Cappato said that as it stood, the proposed law discriminated against terminally ill patients who did not meet the four preconditions for assisted suicide, such as cancer patients who are not on life support. “In the Netherlands, more than 60 percent of euthanasia cases are terminal cancer patients who are not connected to machines,” he said. “Excluding such cases from assisted suicide means discriminating against one person in three.”

Critics of the proposed law say it could force terminally ill patients to undergo tracheotomies or other procedures just for the purpose of accessing suicide assistance.

In addition, the proposed law does not establish deadlines for decisions. “Obviously a terminal patient doesn’t always have time to wait,” Cappato said in an interview earlier this month.

With national elections less than a year away, some who push for the law say senators could try to block its passage so that the next parliament has to start from scratch.

Annamaria Parente, chairwoman of the Senate committee where the law is discussed, said she had asked for quick approval. “It is a duty to move on,” she said.

Some legislators denounced Carboni’s election. Mario Adinolfi, national president of the People of the Family party, warned of a “destructive and deadly madness” that would lead to the “massacre of those who have no cure,” the ANSA news agency reported.

In his farewell letter, Mr. Carboni told his family and friends not to be sad. With the Coscioni association, “we have defended ourselves by attacking and we have attacked by defending ourselves, we have created a judicial milestone and a piece of history in our country and I am proud and honored to have been by your side,” he wrote. .

Don’t cry, he added. “Now I am finally free to fly wherever I want.”