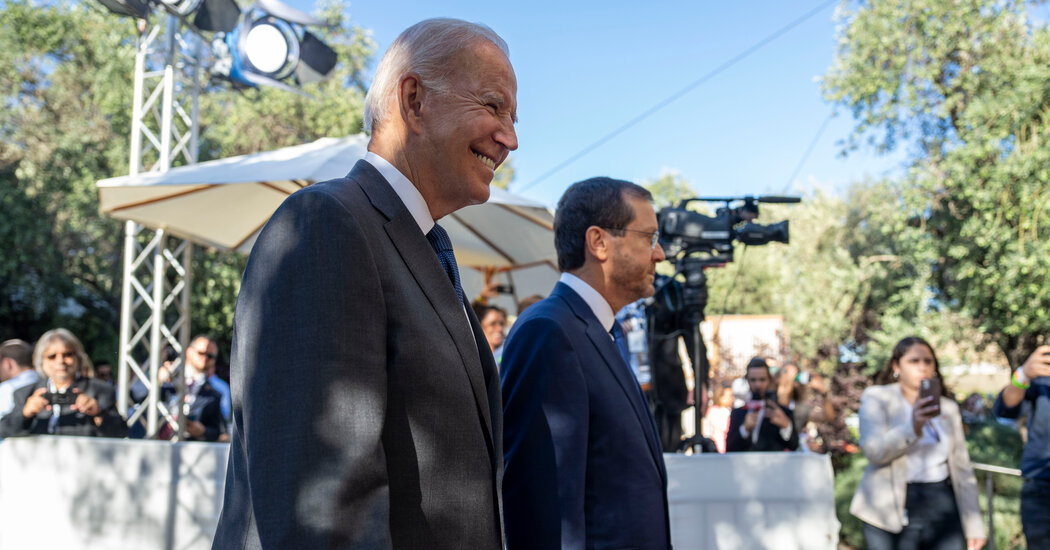 JERUSALEM — This may be President Biden’s first visit to the Middle East since taking office, but he is no stranger to regional politics and diplomacy. Few leaders can match his claim to have known every Israeli prime minister for half a century, beginning with Golda Meir in 1973, or his long record of support for Israel.

Mr. Biden’s first foreign visit to Egypt and Israel, as a young senator, was a baptism of fire. The 1973 Arab-Israeli War, also known as the Yom Kippur War, broke out soon after, beginning with surprise attacks by Egypt and Syria on Israel.

Mr. Biden became a strong advocate for substantive annual economic and military aid to Israel, once calling it “the best $3 billion investment we make.”

He was also a strong opponent in the 1970s and 1980s of the sale of advanced US weapons to Saudi Arabia and other Arab countries, arguing for the preservation of Israel’s qualitative military advantage in the region.

But Biden’s dealings with Israeli prime ministers have also been tense. In 1982, he participated in a bitter exchange with Menachem Begin on Capitol Hill over Israel’s settlement construction in the occupied West Bank. Mr. Begin, a proponent of a Greater Israel that extends beyond narrow pre-1967 boundaries into the captured territories of Jordan and Egypt, described the discussions as “lively”.

Attending Ariel Sharon’s funeral in 2014, Biden described the former prime minister, who had championed Israel’s settlement building and unilateral withdrawal from the Gaza Strip in 2005, as a “complex man” who “also lived in complexes in a very complex neighborhood situation.”

As vice president during the Obama administration, Biden had some testy bouts with Benjamin Netanyahu, a conservative who was in office continuously from 2009 to 2021. When Biden was in Israel in 2010, in part to push for a resumption of Israel- Palestinian peace talks, the Israeli Interior Ministry approved 1,600 new housing units for Jews in Ramat Shlomo in Israeli-annexed East Jerusalem, an area that much of the world still considers occupied territory. The temporary and partial freeze on settlements in force at the time was not being applied in Jerusalem.

Washington saw the announcement as a slap in the face and Biden condemned the move as “precisely the kind of confidence-sapping step we need right now.” Since then, Ramat Shlomo has grown considerably.

In Israel again as vice president in 2016, Biden strongly criticized the failure of the Western-backed Palestinian Authority to condemn a series of bloody attacks. A Palestinian assailant had fatally stabbed an American graduate student and combat veteran along the seafront near Tel Aviv, a mile from where Biden was meeting with a former Israeli prime minister, Shimon Peres.

After Palestinian leaders severed most ties with Washington under the Trump administration, which recognized Jerusalem as Israel’s capital and moved the US embassy there from Tel Aviv, Biden reestablished contact and restored aid that had been cut its predecessor.

But the Biden administration has not reversed several Trump-era policies that dented Palestinian aspirations for statehood and has sought to downplay expectations of any imminent resumption of Israeli-Palestinian peace talks.

The mutual embrace between Netanyahu and President Donald J. Trump further damaged bipartisan support for Israel in Washington that the country has long viewed as a strategic asset, according to experts.

It took nearly a month after his inauguration in January 2021 for Biden to make the traditional courtesy call to Netanyahu, in what many analysts saw as a snub, though the White House denied he intended to do so.