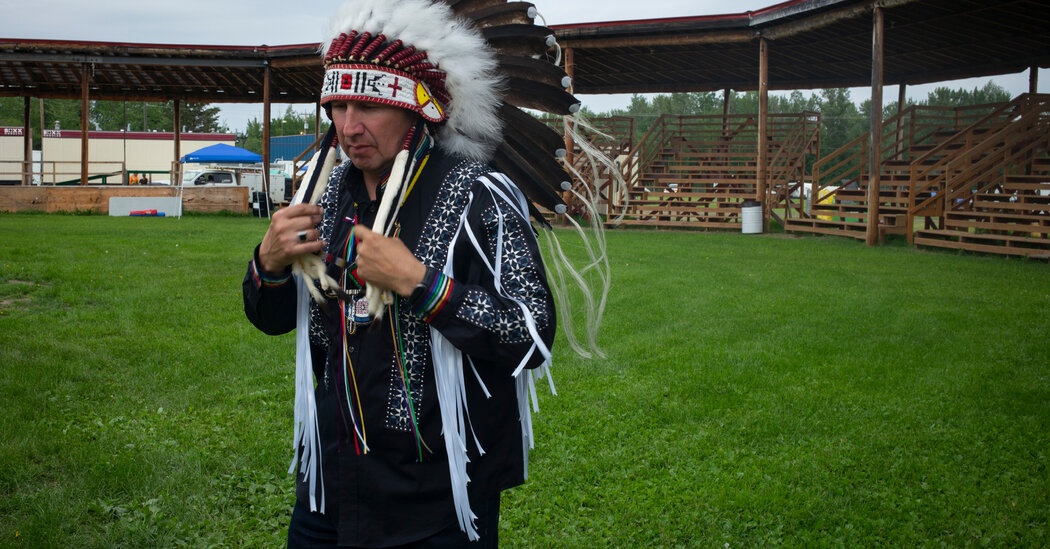 MASKWACIS, Alberta — Pope Francis offered a wide-ranging apology to indigenous people in his homeland in Canada on Monday, meeting a critical demand from many of the survivors of church-run residential schools that have become horrific centers of abuse. forced assimilation, cultural devastation and death for more than a century.

“I humbly ask forgiveness for the evil committed by so many Christians against indigenous peoples,” Francis told a large crowd of indigenous people, some wearing traditional clothing and headdresses, in Maskwacis, Alberta. the site of a former residential school.

The pope apologized in a pow wow circle, a covered ring surrounding an open space used for traditional dance and drumming circles. Around them were teepees, campfires, and booths labeled “Mental Health and Cultural Support.”

Francis, who arrived at the event pushed in a wheelchair, added that his comments were intended for “all Native communities and individuals” and said a feeling of “shame” had lingered since he apologized to Indigenous Peoples representatives. in April at the Vatican.

He said he was “deeply sorry,” a comment that drew applause and shouts of approval, for the ways in which “many Christians supported the colonizing mentality of the powers that be oppressing indigenous peoples.”

“I’m sorry,” he continued. “I apologize, in particular, for the way in which many members of the church and religious communities cooperated, especially through their indifference, in the projects of cultural destruction and forced assimilation promoted by the governments of the time, which culminated in the residential school system.

Those schools separated children from parents; physical, sexual and mental abuse inflicted; erased tongues; and used Christianity as a weapon to break down the cultures and communities of indigenous peoples. Christian churches operated most of the schools for the government with Catholic orders responsible for 60 to 70 percent of the approximately 130 schools, where thousands of children died.

Francis said it was “right to remember” in place of such traumas, even at the risk of opening old wounds.

“It is necessary to remember how the policies of assimilation and emancipation, which also included the residential school system, were devastating for the people of these lands,” he said, adding: “I thank you for making me appreciate this.”

He called the abuses, often committed with missionary zeal, a “disastrous mistake” that eroded the people, their culture and values.

Francis also said that “apologizing is not the end of the matter,” adding that he “totally” agreed with skeptics who wanted action. And he said he hoped more research could be found and that “concrete ways” could be found to help survivors begin a path toward healing and reconciliation.

After delivering his speech, which he gave in Spanish and which was translated into English, Chief Wilton Littlechild of the Ermineskin Cree Nation, who had introduced the Pope, placed a headdress on him, whose white feathers protruded from his white robes. The crowd erupted in applause.

When Francis finished his remarks, many of those who had heard said they were satisfied with his apology.

“He was genuine and good,” said Cam Bird, 42, a residential school survivor on the Little Red River Reservation in Saskatchewan. “He believes us.”

But others were still taking stock of what had just happened after so many generations of devastation and trauma.

“I haven’t really digested it yet,” said Barb Morin, 64, of Île-à-la-Crosse, Saskatchewan, whose parents suffered in residential schools and who wore a T-shirt that read “Residential School Survivors Never Forgotten.” “I’m having a really hard time internalizing this right now.”