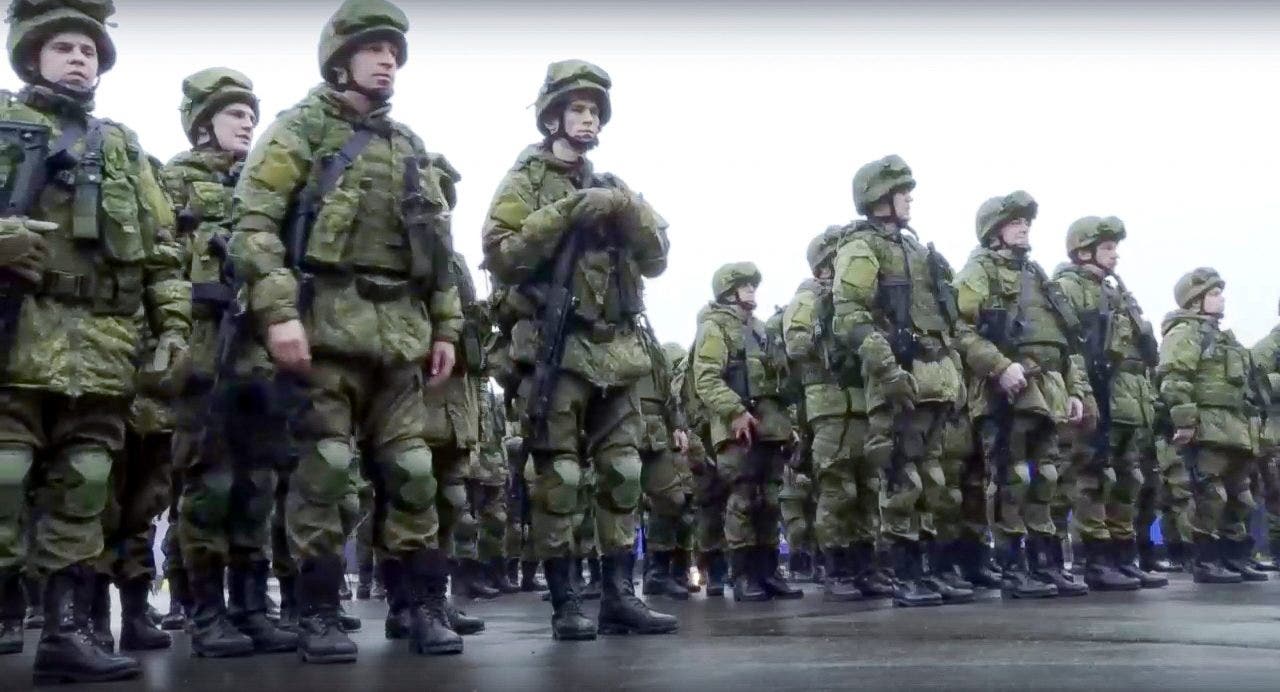 In a series of phone calls obtained by the New York Times, the soldiers detailed atrocities, robberies and a general sense of contempt for Russia’s top brass, including President Vladimir Putin.

“Putin is a fool. He wants us to take Kyiv. But there is no way we can do it,” a soldier said in a call intercepted by Ukrainian authorities and verified by the Times.

The call was apparently recorded during the first days of the war before Putin was unable to take the capital city and regroup his troops to concentrate on eastern Ukraine.

In this handout photo taken from a video released by the Russian Defense Ministry Press Service, Russian recruiters stand before their military training at the Patriot Park outside Moscow, Russia, Saturday, Oct. 2022. Russian President Vladimir Putin ordered a partial mobilization. of reservists to reinforce his forces in the Ukraine.
(Russian Defense Ministry press service via AP)

Dozens of calls were recorded and shared in which soldiers largely discussed with their mothers, wives and girlfriends an intense desire to leave the Russian military.

“They gave us the order to kill everyone we see,” a man named Sergey told his girlfriend. “Kill any passing civilian and drag them into the woods. I’ve already become a murderer.”

“I don’t want to kill more people, especially the ones I will have to look them in the eye,” he added.

Since the war began seven months ago, reports of serious human rights abuses have emerged, including torture chambers, mass graves and executions of civilians.

While many of the calls seemed to show remorse and a sense of entrapment, others detailed things they had stolen, in some cases to survive, including food and medical supplies, while others collected “trophies” and stole televisions to take home.

Others discussed the complete breakdown of communication and leadership that has led to an immense number of Russian deaths.

In one conversation, a soldier named Yevgeniy told his companion: “There is no one left from my Kostroma regiment.”

“There were 400 paratroopers. And only 38 survived,” another named Sergey told his mother. “Our commanders sent soldiers to the slaughterhouse.”

Ukrainian soldiers examine destroyed Russian military vehicles after a battle in Bucha, near Kyiv, Ukraine, Monday, April 4, 2022. Russia is facing a new wave of condemnation after evidence emerged of what appeared to be the deliberate killings of dozens, if not hundreds of civilians in Ukraine.
(AP Photo/Efrem Lukatsky)

In his most recent sweeping advance in Kharkiv, Yuriy Sak, an adviser to Ukraine’s defense minister, said the amount of losses Russia saw surprised even Kyiv, as “9 to 10” Russian soldiers were killed for every Ukrainian soldier who fell. .

“Russian forces are extremely demoralized. The Pentagon has assessed that 80,000 Russian soldiers are already wounded or killed,” he explained. “Putin’s recent mobilization order has triggered [a] mass exodus of Russian men out of the country.

“We can hope that the rest of Russian society – men of military age, mothers, wives – will despair and there will be no end in sight to this war,” he added.

Koffler explained that while Putin and his commanders may understand that they have lost the conventional war, their thirst for dominance over Ukraine has not abated.

A Russian conscript and his wife kiss outside a military recruitment center in Volzhskiy, Volgograd region, Russia, Wednesday, September 28, 2022. Russian President Vladimir Putin has ordered a partial mobilization of reservists to bolster his forces in Ukraine.
(AP Photo)

“Realizing Russia’s conventional inferiority, Russian strategists developed a special doctrine to avoid defeat on the battlefield and end the conflict,” he said. “Putin is probably recalibrating his strategy now.”

The Russia expert said Putin will likely seek to target critical infrastructure through “kinetic and non-kinetic means” such as cyber attacks to further “destabilize” Kyiv, even as he continues to send boots to Ukraine.