At least 15 killed in a mass shooting at a bar in Soweto, South Africa 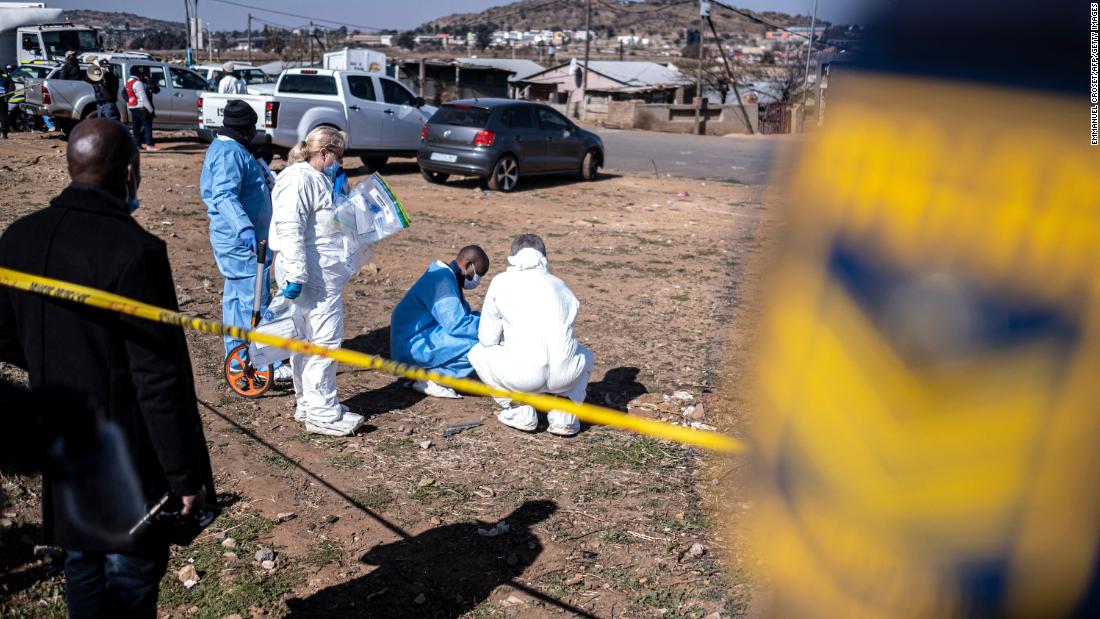 The incident unfolded shortly after midnight, when a group of men armed with rifles and 9mm pistols entered the bar in the informal settlement of Nomzamo, near Johannesburg, and began shooting “randomly” at customers, he said. Gauteng police in a statement.

Police said 23 people were shot at the establishment: 12 died at the scene and 11 were rushed to a nearby hospital with injuries. At least two more people were pronounced dead at the hospital.

The suspects remain at large, according to police, who have asked witnesses to come forward.

“It’s a bad scene. When you see the bodies [that] are stacked, you can see that each one of those people [was] struggling to get out of the tavern,” Gauteng Police Commissioner Elias Mawela told South African news channel ENCA.

Mawela said police have yet to determine details about why or why the people in the tavern were attacked.

“I have no doubt that with the cooperation of the community here, we will be able to solve this case,” he added.

“Every violent death is unacceptable”

In a separate shooting at a bar at Sweetwaters in Pietermaritzburg on Saturday night, four other people were also killed, police said Sunday.

As in the Soweto shooting, police said the suspects were still at large and a manhunt was underway.

In the wake of the violence, the South African National Civic Organization in Gauteng called on the government to tighten gun regulations in the country, according to SABC.

Meanwhile, South African President Cyril Ramaphosa has expressed his condolences to the families of those killed in both attacks, according to a statement from his office on Sunday.

“As a nation, we cannot allow violent criminals to terrorize us in this way, regardless of where such incidents occur,” Ramaphosa said, “As government, citizens and civil society structures, we must work together even more closely to improve conditions social and economic”. economic conditions in communities, reduce violent crime and eradicate the illicit circulation of firearms.

“Each violent death is unacceptable and worrying, and killings on the scale we have seen in Soweto, Pietermaritzburg and earlier Khayelitsha must galvanize us into a collective effort to build communities and make South Africa an unsafe place for criminals,” he said.

The deadly weekend comes when the country is still mourning the death of 22 young people – some of them as young as 13 – who died in still unexplained circumstances in a tavern in east London last month.