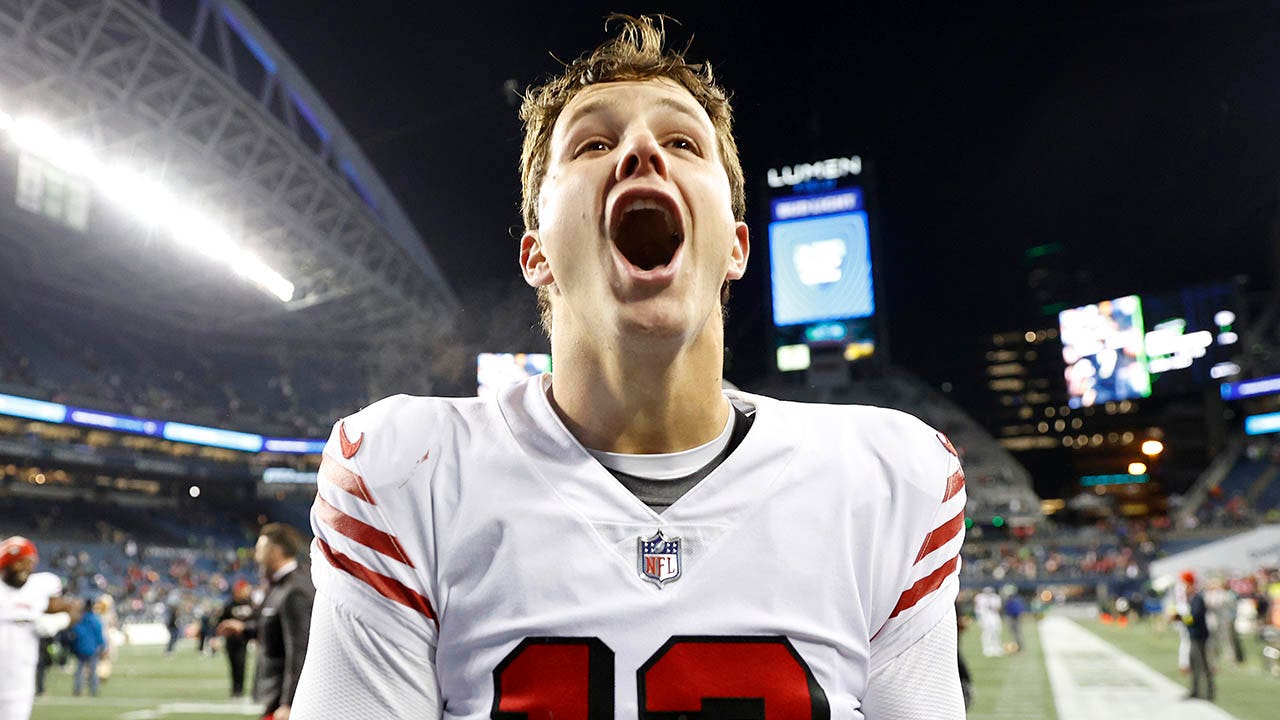 As the final pick of the 2022 NFL Draft, Brock Purdy was dubbed this year’s “Mr. Irrelevant,” but roughly seven months later, it’s anything but.

Purdy entered the season as the third quarterback on the San Francisco 49ers’ depth chart behind Trey Lance and Jimmy Garappolo.

However, Lance suffered a season-ending fractured fibula in Week 2, and Garoppolo could miss the remainder of the season with a foot injury suffered in Week 13.

Purdy entered that game against the Miami Dolphins and led San Francisco to a 33-17 victory. The following week, in his first NFL start, he earned a commanding 35-7 victory over Tom Brady, who was drafted just four months after Purdy was born. On Thursday night, he helped the Niners clinch the NFC West championship.

Brock Purdy #13 of the San Francisco 49ers walks off the field after defeating the Seattle Seahawks at Lumen Field on December 15, 2022 in Seattle, Washington.
(Steph Chambers/Getty Images)

The 49ers defeated the Seattle Seahawks, 21-13, on Thursday to clinch their third playoff berth in the past four years with their third QB of the season. And while Purdy is the unlikely source of the division’s clincher, his self-confidence never wavered, no matter his draft selection or his positioning on the depth chart.

“I’ve always believed in myself. I didn’t know when it would come. But I figured things like this would happen, in terms of going and leading an NFL team in the future,” Purdy told Amazon Prime. Post-game video show on Thursday. “I’ve always had that kind of confidence in myself, but in terms of timing, I give it over to God and I trust his plan and his story, so here we are.”

Purdy credited Brandon Aiyuk, George Kittle and Christian McCaffrey — the latter two combined for three touchdowns Thursday night — as well as head coach Kyle Shanahan. He sure has a good supporting cast to help him get wins, but in his last three games, he’s thrown six touchdowns and just one interception while completing 69.0 percent of his passes for 612 yards.

Brock Purdy #13 of the San Francisco 49ers celebrates after a touchdown against the Seattle Seahawks during the third quarter of the game at Lumen Field on December 15, 2022 in Seattle, Washington.
(Steph Chambers/Getty Images)

When it was mentioned to Purdy that he seemed to be hoping for an early hit, he gave a fairly standard PR response:

“I just tried to go in there, believe in myself and make plays. What Kyle calls, I don’t try to do anything outside of that, so.”

But their star tight end had to interrupt:

“I can answer that actually. What Brock has done since he came in, he trusted the OTAs, he came in preseason, he destroyed the best defense in the NFL, he got to preseason games, he was threading balls, he’s been confident since “He’s been in this building, and everybody’s felt it. He’s just been waiting for a chance. Unfortunately, of all the injuries to the quarterback, he finally got his chance, and he’s just playing and dishing.”

Brock Purdy #13 of the San Francisco 49ers throws a pass against the Seattle Seahawks during the first half at Lumen Field on December 15, 2022 in Seattle, Washington.
(Christopher Mast/Getty Images)

Purdy quipped a moment before that Kittle “just won’t shut up,” but in this case, he’s probably pretty glad he didn’t after that kind of praise.

The Niners moved to 10-4 with the win: In each of their previous five playoff appearances, they were able to make at least the NFC Conference title game.