HomeSportsFalcons' Marcus Mariota steps away from team after being benched, unclear if...
Sports

Falcons’ Marcus Mariota steps away from team after being benched, unclear if he’ll return: report 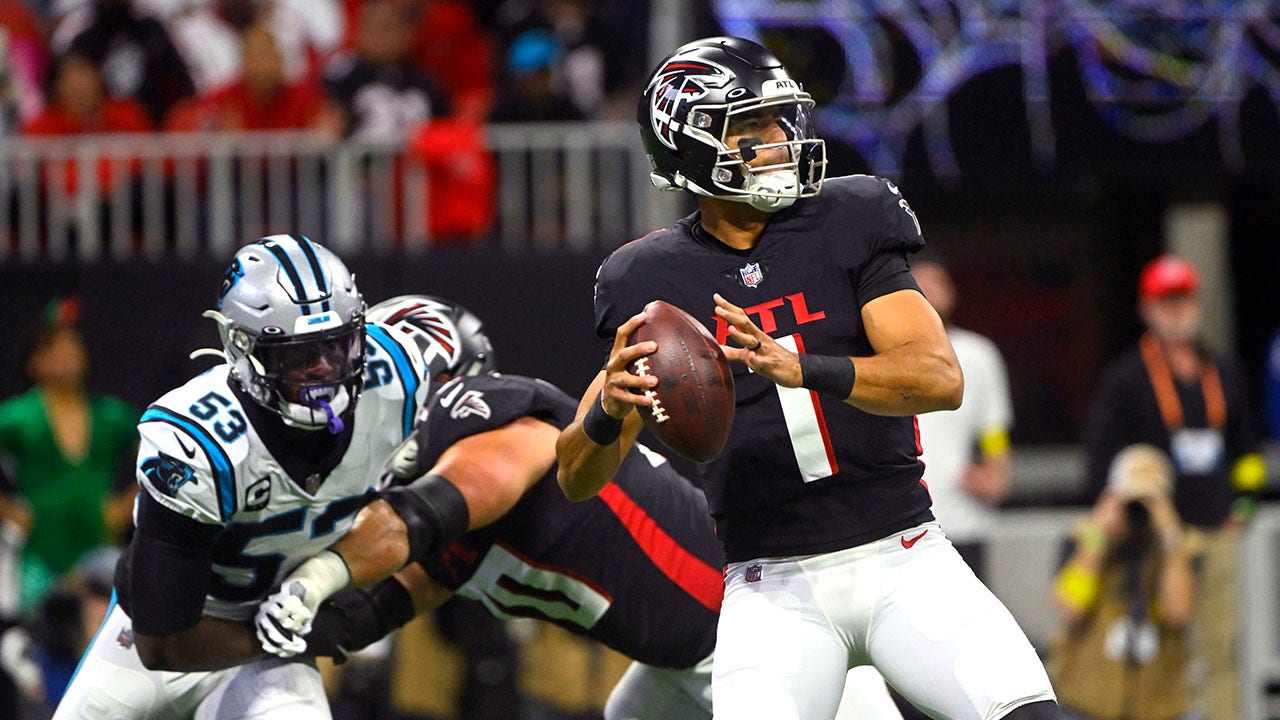 Atlanta Falcons quarterback Marcus Mariota has walked away from the team and there is some uncertainty as to when, if ever, he will return, according to a report in The Athletic.

Mariota’s departure comes on the heels of Falcons coach Arthur Smith announcing the decision to bench the veteran quarterback was “performance-based.”

Despite not taking a single snap thus far in the regular season, third-round rookie Desmond Ridder will step into the starting role.

Smith said Mariota’s absence wasn’t ideal, but noted the team was prepared to be without him.

“Of course, you want all your guys to be here, but guys have to make decisions. It’s part of professional sports. You have to have contingency plans,” head coach Arthur Smith said.

Smith added strangely that Mariota has been dealing with some type of nagging knee injury that will likely result in the quarterback being placed on injured reserve.

Mariota’s knee “is nothing that’s been a problem this season, but that’s (his) prerogative, so …,” Smith said Tuesday.

After the team’s Week 13 loss to the Pittsburgh Steelers, Smith left the door open in regards to making a trade at quarterback.

“We will have some very intense meetings in the next few days. Changes will be made. I will try to be as transparent as possible in whatever we decide to do,” Smith said on Dec. 5. The second year head coach forwarded previously any questions related to a potential change in quarterback position.

Smith also mentioned that Mariota was not at the team facility last Monday because his wife went into labor with their first child.

Marcus Mariota #1 and Desmond Ridder #4 of the Atlanta Falcons walk off the field after the game against the Cincinnati Bengals at Paul Brown Stadium on October 23, 2022 in Cincinnati, Ohio.
(Justin Casterline/Getty Images)

According to The Athletic, Smith informed Mariota that Ridder would start at quarterback on Thursday morning. On Friday, the Falcons learned that Mariota was planning to walk away from the team.

“Those (conversations) are never easy,” Smith said. “You try to be honest, whether they agree or not, those are the conversations you have to have.”

Marcus Mariota #1 of the Atlanta Falcons jogs with teammates during warmups against the Carolina Panthers at Bank of America Stadium on November 10, 2022 in Charlotte, North Carolina.
(Grant Halverson/Getty Images)

Mariota signed a two-year, $18.75 million contract with the Falcons after the team traded Matt Ryan to the Indianapolis Colts in March.

The former Oregon standout and Heisman Trophy winner has led the Falcons to a 5-8 record. But, Mariota’s passing yards, touchdown passes, and contest percentage rank in the bottom half of the league.

Ridder saw significant action during the preseason. He completed 60.1% of his passes for 431 yards and three touchdowns with two interceptions in those exhibition games.

The Falcons are still in playoff contention because they play in the NFC South, a division in which every team currently has a losing record.

Atlanta travels to New Orleans this weekend for a pivotal divisional matchup against their main rival, the Saints.