US and Europe flog UN votes over historic Russia rebuke 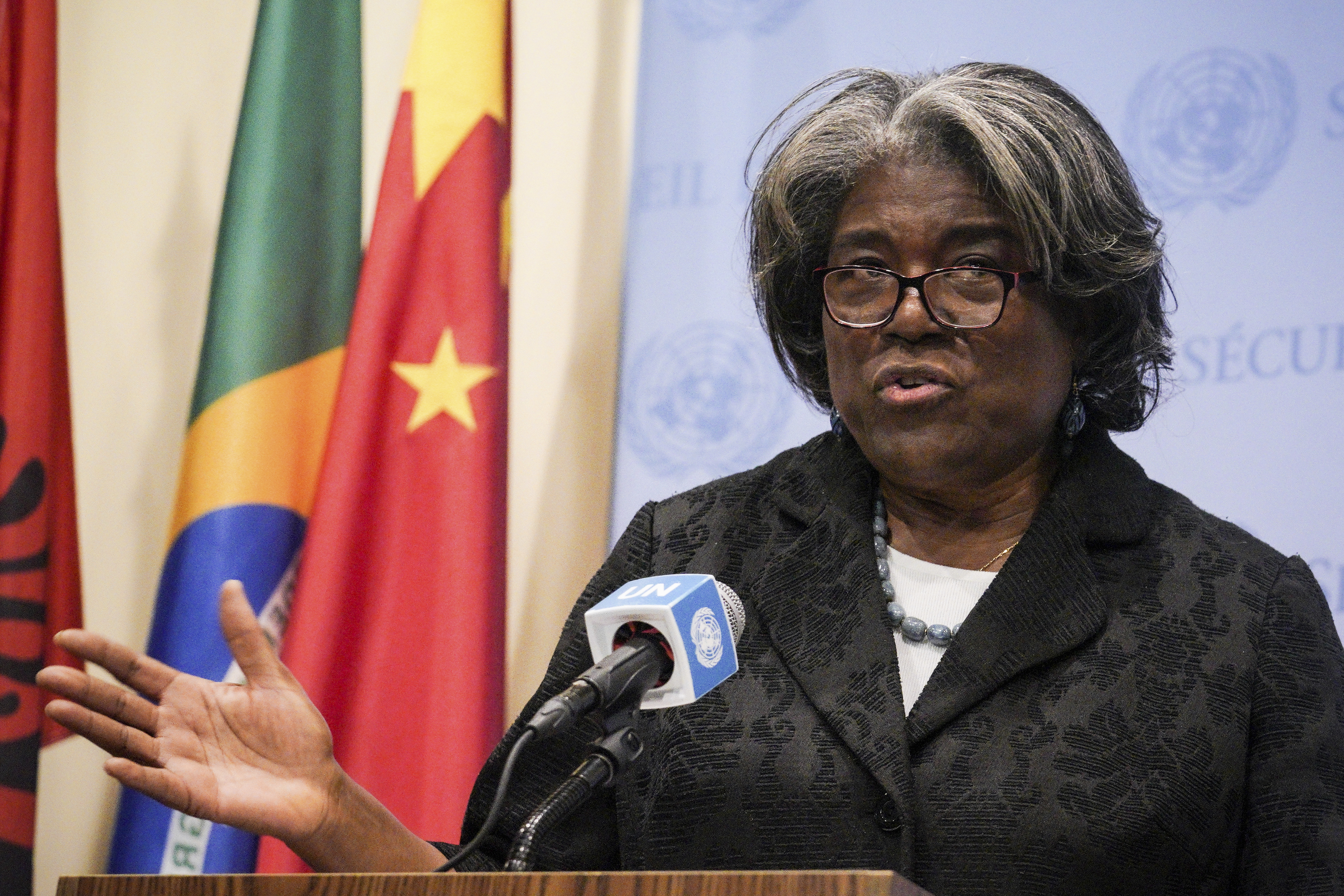 A senior British diplomat described the campaign as a “massive lobbying and outreach effort.” It involves nearly every level of the US diplomatic infrastructure, from ambassadors to assistant secretaries to Secretary of State Antony Blinken. Members of Congress might even make a few calls.

If passed, the resolution would boost the Western effort to isolate Russian leader Vladimir Putin, undermine his claim that he is a liberator and, ideally, convince him that escalating the war will only provoke more global backlash.

The European Union has invited almost all UN members, 188 countries, to discuss the draft resolution. Belarus, Syria, North Korea and Eritrea did not receive invitations due to their opposition to Ukraine’s territorial integrity in previous UN resolutions.

A draft version of the resolution obtained by POLITICO demands that Moscow withdraw its troops from Ukraine and says that the “so-called illegal referendums” organized by the Kremlin to claim four territories as Russian “have no validity under international law and do not form the basis for any alteration of the state of these regions of Ukraine”.

In a letter dated Tuesday and obtained by POLITICO, Vassily Nebenzia, Russia’s ambassador to the UN, writing to his fellow ambassadors, called the draft resolution a “farce.” He described the lobbying effort as a “clearly politicized and provocative development” and urged UN members to vote against the resolution.

Russia is also calling for a secret vote on the proposal in order to limit Western efforts to shame UN members into voting for the resolution.

The benchmark for success, according to the diplomats who spoke with POLITICO, is to get as close as possible to the 141 votes obtained in March condemning Russia’s invasion of Ukraine.

“141 votes is the gold standard, 100 votes is a difficulty,” Rein Tammsaar, Estonia’s ambassador to the UN, said in an interview. “The goal is to grow the coalition rather than agree on a perfect text,” said another European ambassador.

US officials insist that they are not relying on quid pro quos, but are building one-on-one relationships that can take a country from abstention to yes. Key targets likely include India and South Africa, along with many smaller nations that often struggle for the attention of world powers.

As action moved from the UN Security Council to the General Assembly, European officials took the lead in mobilizing countries that have so far abstained on Russia-Ukraine resolutions in 2022, British and UN diplomats said. EU.

While Western officials declined to be specific about which countries are being targeted and how, they have made efforts to include South Africa, which has so far abstained on Ukraine issues, from the beginning of the drafting process.

The process follows efforts to get a similar resolution passed by the 15-member UN Security Council. Russia, permanent member of the council, used his veto to kill that measure In the past week. Now, the focus is on the largest body, the General Assembly, and the momentum is reminiscent of efforts by US Congressional leaders to win votes for a bill.

To organize talks with representatives of reluctant countries, US diplomats are turning to spreadsheets and grids that track which US officials have held meetings or know their relevant foreign counterparts, a State Department official familiar with the matter said. The US ambassador to the United Nations, Linda Thomas-Greenfield, is among the people who use up her Rolodex.

President Joe Biden is unlikely to be directly involved in the effort unless the topic comes up in already scheduled talks with other heads of state. Otherwise, “it really is a full-court press,” said the State Department official, who, like others, was granted anonymity to discuss sensitive matters.

“It’s more of an art than a science,” added a US official familiar with the process.

Allies aim to frame the resolution as a vote establishing that the territorial integrity of a state cannot be changed through violence or sham referendums, and not as an attack on Russia. If the text is strictly limited to the importance of maintaining the territorial integrity of a country, more governments are likely to sign on to it. The more political and anti-Russian language is added, the more doubt some will have.

There is some confusion about what the magic number of votes should be. A UN diplomat said that, depending on the wording of the resolution, a two-thirds majority might be required. Some US officials indicated they would seek a resolution that would require a simple majority. There are 193 member states of the UN. Some may not vote. And if the US and its allies feel they won’t get the votes they need, they may not propose any resolutions.

Either way, the countries that Washington and its partners will pressure will most likely come from Africa and Latin America, important regions in the so-called Global South. Many of these countries have tried to remain neutral in the conflict between Russia and Ukraine, although some have called for an end to the fighting. They point out that the war has caused food, fertilizer and energy shortages that have harmed their populations.

some have stories of “non-alignment”” political, meaning that they avoid taking sides in competitions between the world’s great powers. India, in particular, has frustrated Washington by continuing to buy Russian energy products, filling the Kremlin’s coffers just as the West is trying to squeeze Moscow financially.

The vote has also become an ideal opportunity for countries often ignored by Washington to press their issues on the superpower and its allies. Even the smallest countries, after all, get a vote in the United Nations.

“This vote in particular shows the value of the UN as a global convening body,” said Peter Yeo, senior vice president of the United Nations Foundation. “The reality is that smaller countries have a seat at the UN table, and this is their time not only to negotiate, but also to make sure their views are heard.”

Some countries are also balancing their interest in dealing with China while weighing what to do with Russia. China has remained friendly with Russia despite the latter’s invasion of Ukraine in February. But Beijing has sometimes abstained in related votes, such as during last week’s Security Council session.

Some Pacific island states where China has made inroads may follow Beijing’s lead in the upcoming vote. But each of its votes counts as much as that of a larger country, a factor US officials take into account when deciding whom to engage, when and how.

“Certainly you want to reach out to India and make your best case, but for every India you get, every Barbados also counts, or every Fiji counts, every Palau counts,” the State Department official said.

The Biden administration has emphasized that, unlike the Trump administration, it values ​​the role of multilateral organizations. Thomas-Greenfield, for example, has met with as many of his UN counterparts as possible. Still, there are some foreign governments that feel sidelined by the United States, especially after former President Donald Trump dismissed the concerns of many world leaders.

“Yes, in some cases, you are trying to catch up,” the State Department official said.

US officials argued that even a simple courtesy meeting in which an American envoy listens to another nation’s concerns can go a long way. There could be an opportunity for that during conversations Blinken has with his counterparts while he visits Latin America this week.

Analysts and others watching the process said Ukraine’s friends are unlikely to be able to top the high point in March, when 141 nations condemned Russia’s full-scale invasion.

They pointed to Security Council members Gabon and Brazil, who voted in favor of the March resolution but switched to abstentions on the measure vetoed by Russia last week, as evidence of the difficulty of reaching 141 votes next week.

Instead, some diplomats peg their basic hope at 100 votes: the same number of countries that voted for a 2014 General Assembly resolution criticizing Russia’s effort to subsume the Ukrainian region of Crimea through a bogus referendum.

Attempts to get comments from about a dozen countries that abstained in earlier votes related to Russia and Ukraine were unsuccessful on Tuesday. The Russian delegation to the United Nations also did not respond to a request to discuss its lobbying effort.

The draft resolution obtained by POLITICO had several paragraphs that insisted on the idea that Russia was violating international law. The large number of such paragraphs can be a turn off for some countries. “Most members of the UN want to think that this can be resolved peacefully in a short time,” said Richard Gowan, a UN analyst with the International Crisis Group. “Ukraine could lose sympathy if it seems too aggressive, even unfairly.”

Putin’s recent annexation claims apply to four regions of Ukraine. The so-called referendums held there often involved Ukrainians being forced to vote at gunpoint, according to press reports.

Among the arguments the United States and its allies are giving to countries as they gather votes for the next resolution is that Russia’s actions undermine the principles of the UN Charter. That was a point Biden made in his recent speech to the annual meeting of world leaders at the UN.

Ukrainian President Volodymyr Zelenskyy has been more direct, urging countries to abandon neutrality. “You definitely have to choose sides,” he said last month. “You cannot vacillate between good and evil, light and dark.”