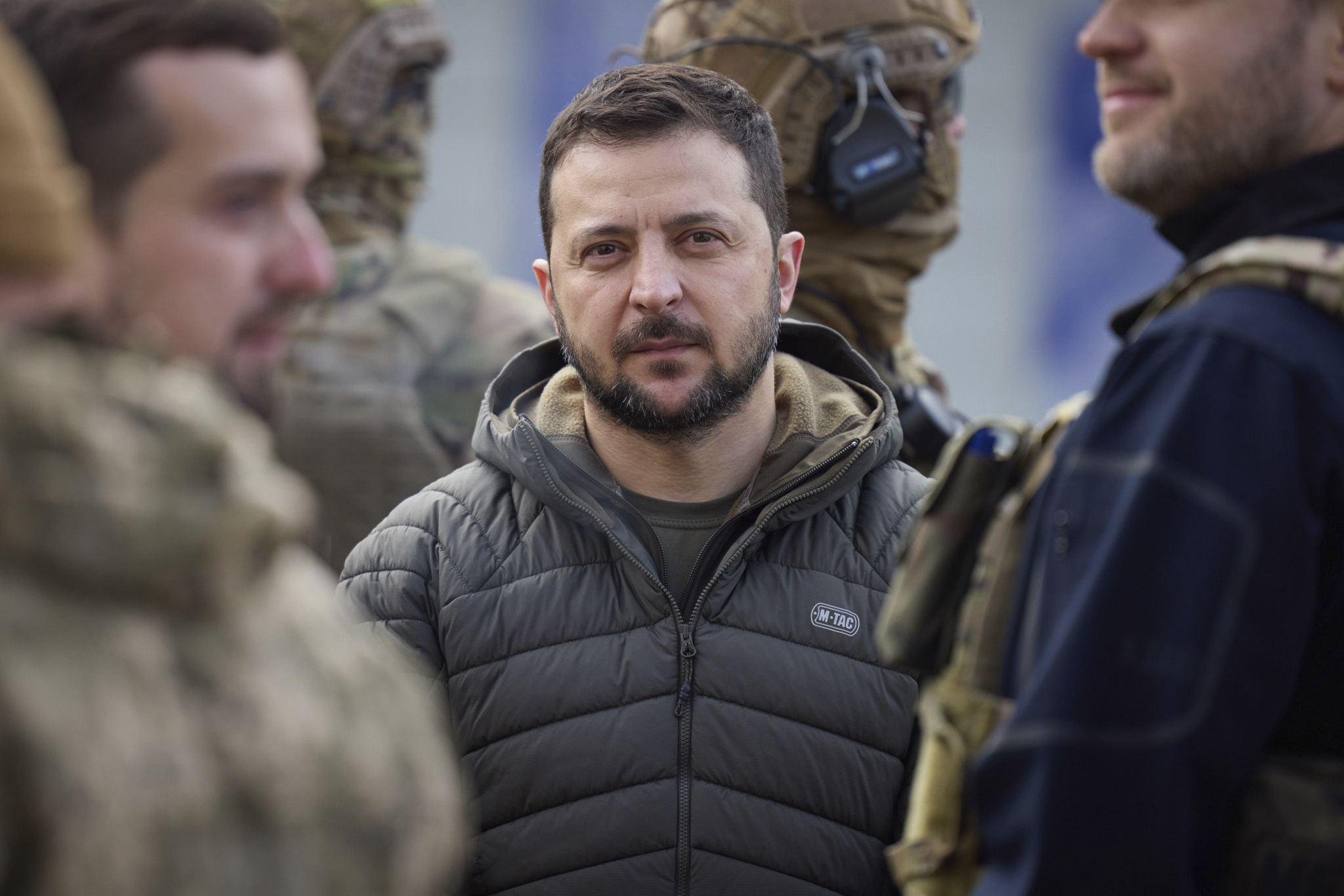 The snow-covered capital remained mostly calm after the foiled attack, which occurred around dawn. When the working day began, the authorities gave the go-ahead.

The head of the Kyiv city administration, Serhii Popko, wrote on Telegram that the attempted attacks came in two waves. Debris from the intercepted drones damaged an administrative building and four residential buildings, he said.

An explosion left the three-story tax office building in the central Shevchenkyvskyi district with a gaping hole in the roof and blew out the windows of parked cars and in a neighboring building.

Cleanup crews rushed to the scene to remove debris and deploy plastic sheeting to cover broken windows in subzero temperatures. An unfazed man pushed his son on a swing at a nearby playground while teams worked.

Another father, Anton Rudikov, said his family was sleeping when they heard an explosion and broken windows. “Thank God the children weren’t affected” beyond the scare, said Rudkov, whose daughters are 13 and 18. But why Russia would attack his neighborhood puzzled him.

“I didn’t do anything bad to them, but it hit my house. From where? I don’t understand why,” she said.

Residents told Associated Press reporters they saw fragments of a drone with the words “For Ryazan” on it. The Kremlin claims that Ukraine was responsible for a cross-border attack last week against a military base in the Ryazan region of western Russia.

Ukrainian authorities have touted their ability to shoot down Russian weapons. But strikes in some areas continue to cause death and havoc, particularly near the front lines in the east and south. In the southern city of Odessa, drone strikes temporarily cut off power last week. Kyiv has suffered comparatively little damage.

Apparently more air defense help was on the way. US officials said Tuesday that the United States was ready to approve sending a battery of Patriot missiles to Ukraine, acceding to an urgent request from Ukraine. The Patriot would be the most advanced surface-to-air missile system the West has provided to Ukraine to help repel Russian airstrikes since Russia invaded on February 24.

The Russian embassy in Washington said the delivery of a Patriot missile would be “another provocative step by the administration, which could have unpredictable consequences.” He added that this would cause “colossal damage not only to US-Russian relations, but would create additional global security risks.”

US officials said last week that Moscow has sought out Iran to resupply its military with drones and surface-to-surface missiles.

Damage from Russian attacks has disrupted electricity, heating and water supplies as winter approaches. However, the UN migration agency said more than 5 million people who were displaced inside or outside Ukraine since Russia invaded have returned. The International Organization for Migration said from November 25 to December 25. The January 5, 2002 telephone survey of respondents in Ukraine found that only 7% were considering leaving.

Providing other estimates, Ukraine’s human rights chief said Wednesday that about a fifth of the country’s pre-war population sought refuge abroad during the war. Dmytro Lubinets said that 7.9 million Ukrainian citizens left the country and 4.9 million were internally displaced. Lubinets did not specify how many Ukrainian refugees have returned.

POWs were also on the move. Zelenskyy’s bureau chief Andriy Yermak said 64 Ukrainian soldiers and one US citizen living in Ukraine were freed in the latest prisoner exchange with Russia. In a Telegram post, he identified the “American citizen who helped our people” as Suedi Murekezi. Yermak did not provide further details.

It was not immediately clear what role, if any, Murekezi played in Ukraine. A US official who spoke to The Associated Press on condition of anonymity to discuss the Ukraine conflict confirmed that Murekezi has been released. The official said Murekezi had been living in or near Kherson and had been detained by Russian forces. A group that claims to have helped rescue him, Project Dynamo, said Murekezi was a US air force veteran detained by Russian forces in June. Florida-based Project DYNAMO, an international nonprofit search, rescue and relief organization, said he was released on October 28 and later lived in Donetsk.