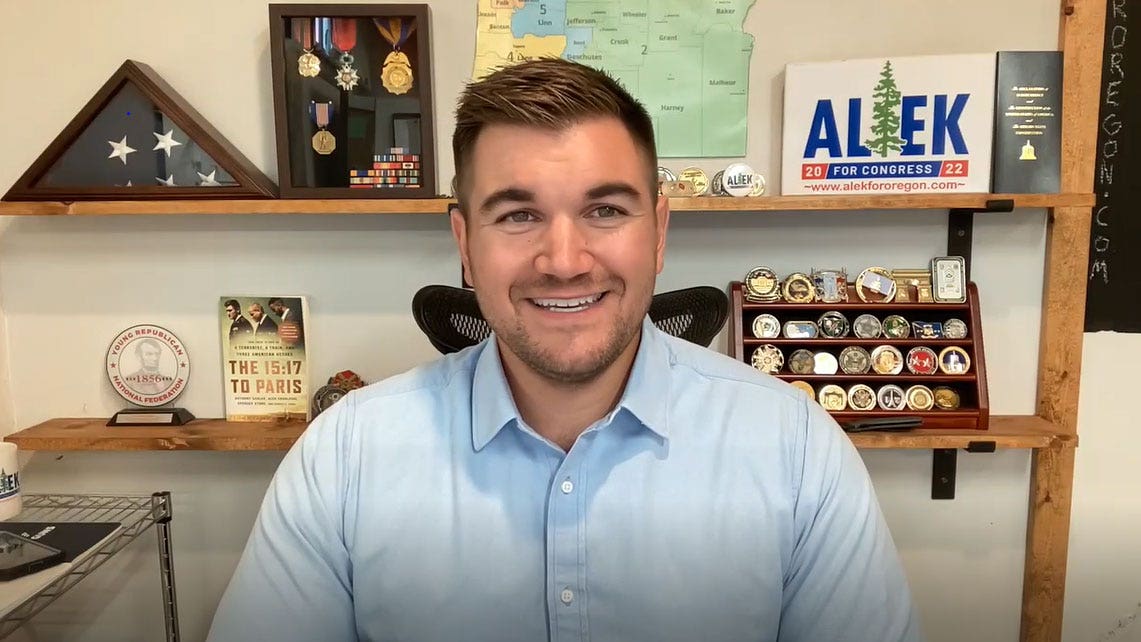 A former US Army soldier, who helped thwart a terrorist attack in France in 2015 and is now running for Congress in Oregon, says voters are “fed up” with the economic woes and rising crime that plagues the state and the country.

In an interview with Fox News Digital, Alek Skarlatos, the Republican candidate in Oregon’s 4th congressional district, explained how his military experience had prepared him to represent Oregonians across political spectrums, especially those weary of Democratic representation and governance for decades. in the state. Furthermore, he argued that he was the better option than his Democratic opponent to get the country off the unsustainable path he has been on.

“I think people have had enough of this one-party leadership that has obviously led us down the wrong path,” Skarlatos said when asked about his chances in the Democrats’ slightly favored seat in November’s midterm elections.

“I call on everyone in the district, [including] Democrats who have had enough of one party rule in this state for 40 years. Things haven’t gotten any better under the Democratic Party’s 40-year rule of state,” he added later. “I am appealing to unaffiliated voters, who I think are going to change our ways in this election anyway. And I hope that Republicans will also show up to vote for me.”

Skarlatos detailed how his experience as a soldier, during which he and a group of fellow servicemen stopped an Islamic extremist from attacking passengers on a Paris-bound train, had set him apart from the typical politician in Washington, DC. He also expressed a desire to see more veterans elected to Congress, something that has happened less and less since the decades immediately following World War II, when most of Congress had previously served in the military.

“I think the military taught me a lot about how to deal with bureaucracy in the first place, and also about decision and taking action in a way that I think a lot of politicians in DC could learn from,” he said. “I think we’re at one of the lowest points for veteran membership in political office in this country. And I hope to change that.”

“No one has more interest in what happens to the young people of this country, whether it’s fighting another war or the terrible way we pulled out of Afghanistan, than veterans. So I hope to see myself and many other veterans choose this cycle,” he added.

Skarlatos admitted that, considering the Democratic advantage in the district, it would be difficult for him to run a campaign just to gain the support of Republicans and Republican-leaning independents.

He stressed the importance of winning over the people in the middle, as well as some “soft Democrats,” and expressed optimism that it could be achieved by focusing on “common sense issues” that would appeal to everyone, such as high gas pricesinflation, high interest rates, and rising crime across the state.

Access to health care, he said, was high on his list of legislative priorities should he be elected, noting that the district is the poorest and oldest in the state.

“I think that’s something everyone can get behind, whether they’re Republicans, Democrats or unaffiliated,” he said.

Skarlatos lamented the homelessness facing Oregon, as well as the left-wing activism the state was becoming increasingly known for, but said the problem wasn’t just relegated to his part of the country.

He blamed rising gasoline and diesel prices for partially affecting the rise in the cost of goods across the country, pointing to his district being largely rural and poorer as the reason it looks more affected by these economic problems.

“Being the poorest congressional district in the state, we can afford inflation, and gas prices are the lowest anywhere in the state of Oregon, and in particular just about anywhere else on the West Coast. I mean, this is a very blue-collar, working-class district and people aren’t getting more for their money. They’re getting significantly less,” he said.

Skarlatos added that the difference between him and Val Hoyle, the Democratic candidate for the district, could come down to their positions on how to deal with those economic problems.

“Val Hoyle has said he doesn’t believe in any new fossil fuel infrastructure when gasoline is $5 a gallon in the state and diesel is about six. He also voted to raise taxes on hospitals and nursing homes, again, our most vulnerable seniors in the state’s poorest congressional district can afford that too,” he said.

“I think that kind of basic economic issues is where you will see us apart. I mean, she’s pretty appealing to Democrats in the district. Her sign even says a Democrat for Congress,” she added.

He went on to express his hope that Oregonians in District 4 would realize they were no better off under decades of solely Democratic rule, and that he would win over unaffiliated voters, as well as benefit from Republican enthusiasm for the election.

“It looks like this country is really at a tipping point. And if we can’t win an open seat in this kind of year in Oregon, it looks like we’re hopeless. So I certainly hope that we can win back the House and win a lot of these competitive seats in a year like this,” he said.

“I mean, hell, even as we speak, the Dow is down over 1,200 points. So I think we can’t maintain the direction that this country is currently in,” he added, referring to Tuesday. biggest drop in a single day in the stock market after a worse-than-expected inflation report.

The general elections will take place on Tuesday, November 8.