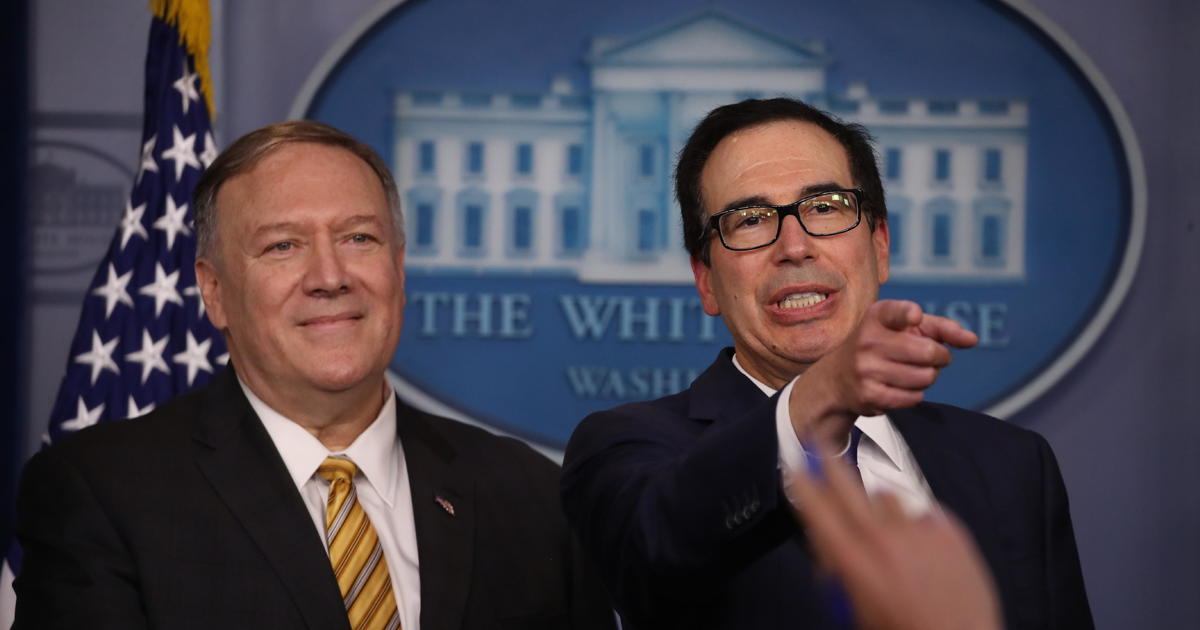 It was one of the final decisions Trump officials made before leaving office. On January 15, 2021, the Treasury Department eased sanctions against Israeli billionaire Dan Gertler, temporarily restoring his access to a network of companies and frozen bank accounts that US officials say he used to defraud more than $1.3 billion in mining revenue from the Democratic Republic of Congo.

Nearly two years later, CBS News has learned that the approval came despite strong objections from some top State Department officials, who the documents suggest were denied a hearing to present their case before the then- Secretary of State Mike Pompeo.

The documents, obtained through a Freedom of Information Act request by the nonprofit watchdog group Citizens for Responsibility and Ethics in Washington (CREW)it also shed more light on the intense lobbying campaign by Gertler and his lawyers, including former FBI Director Louis Freeh and former Trump private attorney Alan Dershowitz, who advocated for Gertler’s release from sanctions.

“I am not aware of any other case where sanctions have essentially been removed without a clear factual basis justifying the removal,” said John Smith, who headed the Treasury Department’s Office of Foreign Assets Control in 2017 when Gertler was originally sanctioned. In Smith’s view, “what seemed to be missing in this case was a legal reason for removing these sanctions rather than a political basis.”

Smith said that while Gertler was not technically removed from the list, he was granted a license that in effect served the same purpose and allowed the administration to grant him sanctions relief without public disclosure, which he claimed would have caused a scrutiny.

Within weeks of his inauguration, the Biden administration reimposed sweeping sanctions on Gertler, citing his “extensive public corruption.”

Still, Smith said the businessman would have had access to any previously sanctioned bank accounts or property from the time the license was issued.

Gertler declined an interview request. However, in response to a query from CBS News, a representative for Gertler said that “no transaction took place and Mr. Getler continued to operate as if no [license] had been granted and the sanctions remained in force.”

Gertler was first sanctioned in 2017 by the Treasury Department, which said the businessman took advantage of his relationship with former Congolese President Joseph Kabila to serve as a “middleman” between multinational companies seeking to do business with the mineral-rich Congolese state. The department said Gertler “accumulated a fortune through hundreds of millions of dollars in opaque and corrupt oil and mining deals.”

As far back as 2001, Gertler has been accused of propping up the former regime in the Democratic Republic of Congo, or DRC, by providing “money, weapons and military training” in exchange for access to so-called blood or “conflict” diamonds. , according to a United Nations report.

Ambassador J. Peter Pham, who helped craft the sanctions package, told CBS News that Gertler’s activities in the Democratic Republic of the Congo extended beyond diamonds to rare metals like cobalt, which are crucial to the production of electric vehicles.

“Without cobalt from the DRC, we don’t have a ‘green tech’ revolution,” said Pham, who served as the Trump administration’s special envoy for Africa’s Great Lakes region.

Pham was highly critical of Gertler’s central role in mining activities in the Democratic Republic of the Congo and raised those concerns with the State Department.

Gertler’s representative said he “has never accepted the basis on which the sanctions were imposed on him and denies any wrongdoing.” However, the president said that “at all times he has fully complied with them and will continue to do so.”

“How to pull teeth”

An email obtained by CREW and shared with CBS News says Freeh and Dershowitz have been lobbying State Department officials on Gertler’s behalf since 2019.

“They are seeking support and guidance for their upcoming petition to Treasury to remove Gertler from the Global Magnitsky Act sanction, as imposed in December 2017 for corruption and bribery, for example, undervaluing mining claims and then reselling them for a huge profit, which supported Kaliba’s continued oppressive reign,” a State Department official wrote to colleagues.

In the email, the official said that Freeh, Dershowitz and other lawyers working for Gertler argued why he should be released from sanctions, including his willingness to “exercise influence in support of US interests in the Democratic Republic of the Congo and against Russia and China.

Reached by phone, Dershowitz told CBS News that he also met with Trump administration Treasury Secretary Steven Mnuchin “three or four times” on Gertler’s behalf and Mnuchin “seemed to have an open mind.” Dershowitz said the effort included circulating a video produced by Gertler’s team showing the businessman’s humanitarian efforts in the Democratic Republic of Congo.

“He had completely changed,” Dershowitz said of Gertler. “We were asking for a trial period to show that he could continue to do business in a completely legitimate way.”

Dershowitz, who said his role was limited to making the legal arguments in favor of easing Gertler’s penalties, denied that the issuance of the license was a snap decision made in the final days of the administration.

“It was a slow and exhausting process, like pulling a tooth,” he said. “Eventually, though, we made it.”

He said a breakthrough was made when the Israeli government got involved and raised “national security issues” that “reached pretty high,” though Dershowitz said he was “out of the loop” on those issues.

The New York Times previously reported The United States said the sanctions on Israel Gertler would be eased “for reasons of American national security.”

The Israeli Embassy did not respond to a request for comment.

Pham said he was also pressured by Freeh and his partner, and they did not present any national security reasons justifying the relaxation of sanctions against Gertler.

“They were speaking in generalities,” Pham said. “They couldn’t give me details of what Gertler had done to change his stripes.”

Through a spokesman, Freeh denied any involvement in the license application and the decision, saying he learned about this from media reports, but did not respond to a question about meeting with State Department officials.

“The credibility of the United States has been significantly damaged”

On November 2, 2020, Assistant Secretary of State Peter Haas, a career civil servant, wrote Pompeo to request a meeting. According to the declassified State Department memo, his Treasury Department counterparts notified department officials in October 2020 that he would approve Gertler’s license “absent the State’s objection.” The markings on the memo suggest that Pompeo declined to attend the meeting.

A second memo suggests that Gertler was granted not one, but two licenses in the waning days of the Trump administration. The first, in November 2020, allowed Gertler to distribute “$10 million of his wealth throughout the Democratic Republic of the Congo for what he says are charitable purposes” and the second, in January 2021, provided him with a “radical easing of sanctions”.

The January 2021 license was first reported by another nonprofit watchdog group, The Sentryand aired at the same time Dershowitz was advising Trump on his impeachment legal defense in the wake of the Attack on the Capitol on January 6. Dershowitz said he never spoke to Trump about Gertler.

“These licenses provide Gertler with significant opportunities to exert malign influence in the Democratic Republic of the Congo in a manner that would undermine the interests of the United States,” Haas wrote in a declassified memo, adding that “the credibility of the United States has been significantly damaged.”

Gertler’s representative said he had a “legal right to request delisting” and that the temporary license “was granted on its merits” and in accordance with the law.

In a request sent Friday to the inspectors general of the State and Treasury Departments, CREW requested an investigation into whether Pompeo and Mnuchin may have violated sanctions laws and into any transactions Gertler executed while the licenses were in effect.

A Mnuchin spokesperson told CBS News that the former Treasury secretary cannot discuss deliberations about any specific past actions taken by the department’s sanctions arm. A Pompeo spokesman did not respond to questions about his role.

Pham said he is concerned that the US government has sent a message to bad actors that they could get relief if they hire the right lobbyists.

“It certainly took a bite out of the fear of sanctions,” he said.