In Israel, Biden pressed on the upcoming trip to Saudi Arabia: 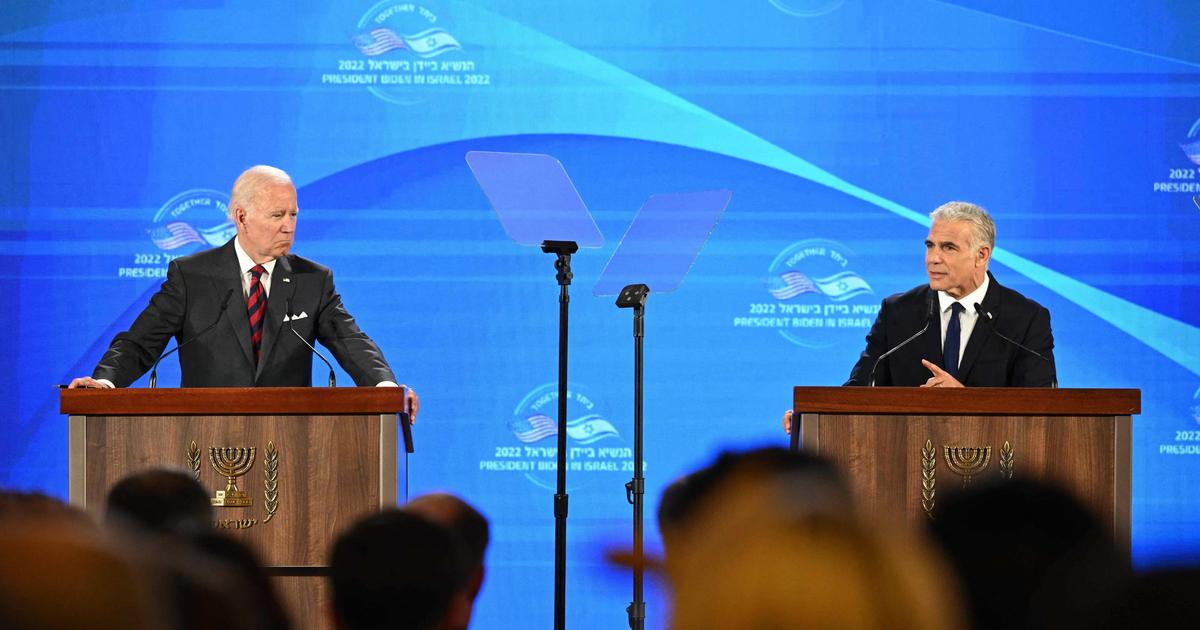 President Biden said Thursday that he “always brings up human rights” as he prepares to travel to Saudi Arabia this week. Mr. Biden made the remarks at a joint press conference in Jerusalem alongside Israeli Prime Minister Yair Lapid, in his first trip to the middle east as president.

Mr. Biden is in Israel before heading to the West Bank and then to Saudi Arabia for a summit of leaders in the Middle East. Key focuses during his visit include energy security and strengthening ties in the Middle East, even as the president plans to hold a bilateral meeting with the Saudis afterward. US intelligence has concluded that Saudi Crown Prince Mohammed bin Salman Al Saud approved the operation to “capture or kill” critic and journalist Jamal Khashoggi in 2018. In the 2020 presidential campaign, Biden said he and his administration would turn the Saudi kingdom, a partner of long standing due to American interests, in a global “pariah”.

Asked how he would handle Khashoggi’s killing, Biden said Thursday that he will meet with many leaders other than the Saudis during a summit in Saudi Arabia, but that he “always brings up human rights.” The president did not specifically commit to mentioning Khashoggi in talks with the Saudis.

Lapid, in his opening remarks, said that Mr. Biden’s visit to Saudi Arabia is important for Israel and the entire region, saying that Israel sends a message of peace to the Palestinians.

“Israel wants peace and believes in peace,” Lapid said. “We will never give up an inch of our security. We are obliged to be cautious at every step, but to any country, any nation, that wants peace and normalization with us, we say… shalom. Welcome.”

Mr. Biden expressed a “deep love and respect” for Israel that has only grown over the years. This is his tenth visit to the country. The president recalled how 50 years ago, when he visited, the prime minister at the time told him not to worry, because Israel has a secret weapon: they have nowhere to go.

“The threats were real then and the threats to Israel are still real today,” Biden said.

Both leaders expressed their continued support for Ukraineand a commitment to keep nuclear weapons out of Iran. A statement signed between Mr. Biden and Lapid before the press conference sets out their intention to never allow Iran to acquire a nuclear weapon, reaffirms Mr. Biden’s support for a two-state solution, and includes Israel’s thanks to the USA by the Abraham Accords. , among other things.

White House officials have said that the goal of the Israel stop is to reaffirm and reinforce the strong ties between that country and the US, particularly given global turmoil and challenges in the climate, energy and nuclear spaces. Upon his arrival in Israel on Wednesday, the president visited Yad Vashem, the memorial to the victims of the Holocaust in World War II, and was briefed on Israel’s Iron Dome and Iron Beam air defense systems.

After Thursday’s news conference, Biden will meet separately with Israeli President Isaac Herzog and former Prime Minister Benjamin Netanyahu. Later on Thursday, she will give a motivational talk at the Maccabean Games opening ceremony for Jewish athletes from around the world.

On Friday, the president is expected to speak at Augusta Victoria Hospital about the East Jerusalem Hospital Network and meet with President Mahmoud Abbas of the Palestinian Authority in the West Bank.

This week, Biden will become the first US president to fly directly from Israel to Saudi Arabia, a nod toward normalizing relations. Mr. Biden plans to meet with the Saudi king and Saudi crown prince while he is there for the Gulf Cooperation Council summit.

Biden is expected to mention Iran extensively in his talks with the region’s leaders, as the US and its allies seek to stop Iran’s nuclear ambitions. The president said in an interview with an Israeli television channel before he left for the trip that he would use force against Iran as a “last resort,” when asked about steps he would take to prevent Iran from obtaining a nuclear weapons program. . The president called it a “giant mistake” that former President Trump pulled out of the deal.

“Because the only thing worse than Iran that exists right now is Iran with nuclear weapons,” Biden said in the interview. “And if we can go back to the deal and stick to our guns, I think it was a huge mistake that the last president walked out of the deal. They’re closer to a nuclear weapon now than they were before. They’re not.” it has something to do with whether or not the police force will stop, whether or not they will continue to engage in activities. We can act against them and still have an agreement that they reduce their nuclear program. And so, I still think it makes sense. We’ve sat down at the table. We’ve made the deal. We have offered it and now it’s up to Iran.”