HomePoliticsFox News footage shows mass release of immigrants to the US as...
Politics

Fox News footage shows mass release of immigrants to the US as numbers hit 500,000 for FY23 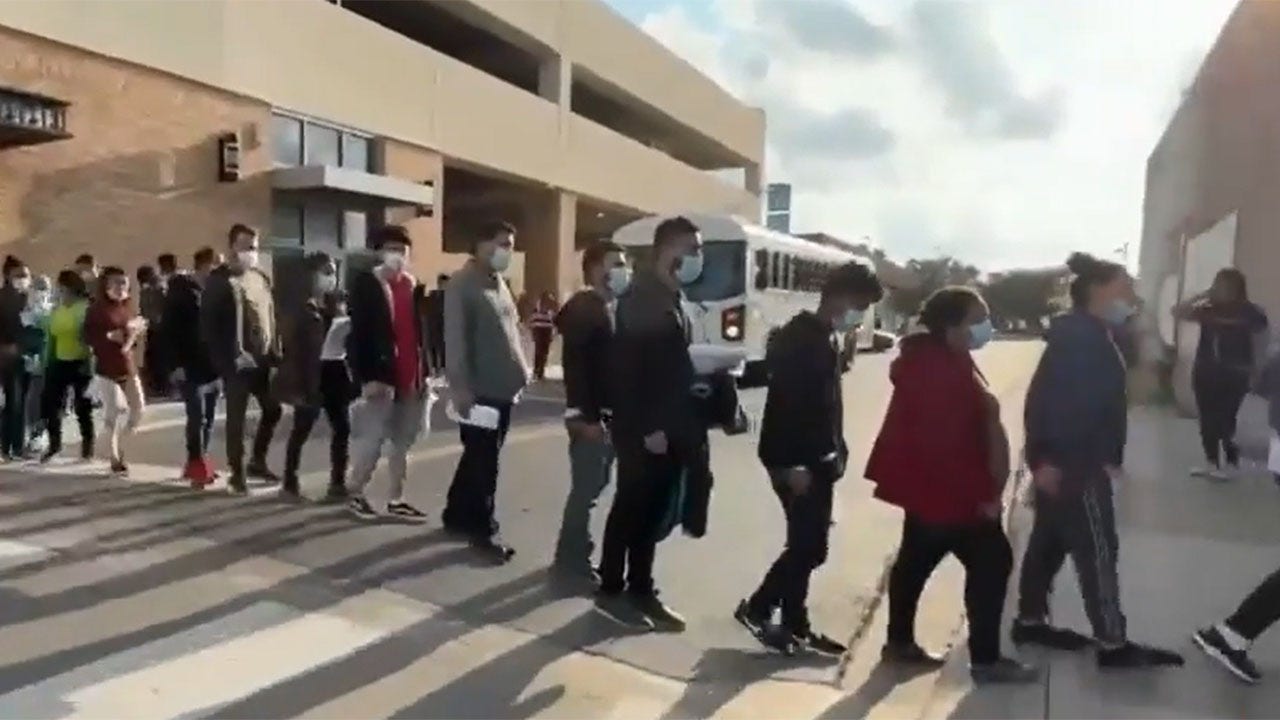 Footage captured by Fox News shows the continued mass release of illegal immigrants into the US interior as authorities face overwhelming numbers, with more than half a million arriving at the border since October.

After a huge caravan of migrants arrived at the border Monday, Border Patrol began releasing migrants en masse onto the streets of El Paso, with Fox seeing dozens of migrants standing and camping on a single street corner.

Meanwhile, in Brownsville, Texas, Fox News witnessed repeated mass releases of several hundred migrants in a parking lot. The migrants were dropped off by the hundreds, at which point they walked to a local non-governmental organization where their travel documentation was handed over. From there they are free to take a flight or bus across the country.

Sources told Fox News that Border Patrol is releasing up to 10 buses a day, a practice Fox News previously reported on.

The migrants are released by Border Patrol in Brownsville, Texas, this week.

It comes as border authorities continue to face high numbers in what is typically a quiet period for the border, coming just days before Title 42 authority allowing migrants to be expeditiously removed back to Mexico. terminated by court order.

That impending end to the order has raised concerns that it is encouraging immigrants to travel north now that they potentially face a better chance of entering the US. The Biden administration appealed the court order, which found Title 42 was illegal, but that appeal will not be in time to stop the completion of the order.

Customs and Border Protection (CBP) sources told Fox that there have already been more than 500,000 encounters this fiscal year, which began in October. There have been over 505,000 encounters, averaging just under 7,000 per day. Of those, 162,547 have been removed under Title 42.

CBP acknowledged that it has seen an increase in encounters along the border in recent days.

“The El Paso sector of Customs and Border Protection on the Texas-Mexico border has seen an increase in encounters,” CBP said in a statement to Fox News Monday afternoon. “To process people as safely and quickly as possible, Big Bend Border Patrol agents and CBP officers from the El Paso Field Office are assisting with processing.”

The Biden administration has said it has a six-point plan to deal with the surge in numbers when Title 42 is lifted on December 21. That includes increases in resources and personnel, a greater emphasis on anti-smuggling operations, greater cooperation. with other countries and increased use of alternative removal authorities such as expedited removal.

DHS Secretary Alejandro Mayorkas is in El Paso meeting with Customs and Border Protection (CBP) officials. The DHS chief has had a rocky relationship with Border Patrol, and has recently been dogged by calls from top Republicans for him to resign and threats of possible impeachment when Republicans take the House next year.

The administration’s promises of a whole-of-government plan have not assuaged the concerns of both Republicans and Democrats, some of whom are working in Congress on a possible compromise that would include a one-year extension of Title 42.

Meanwhile, in Matamoros, Mexico, right across from Brownsville, thousands of migrants are camping out waiting for the end of Title 42, which is now just eight days away.

Biden says the US will not provide F-16s to Ukraine