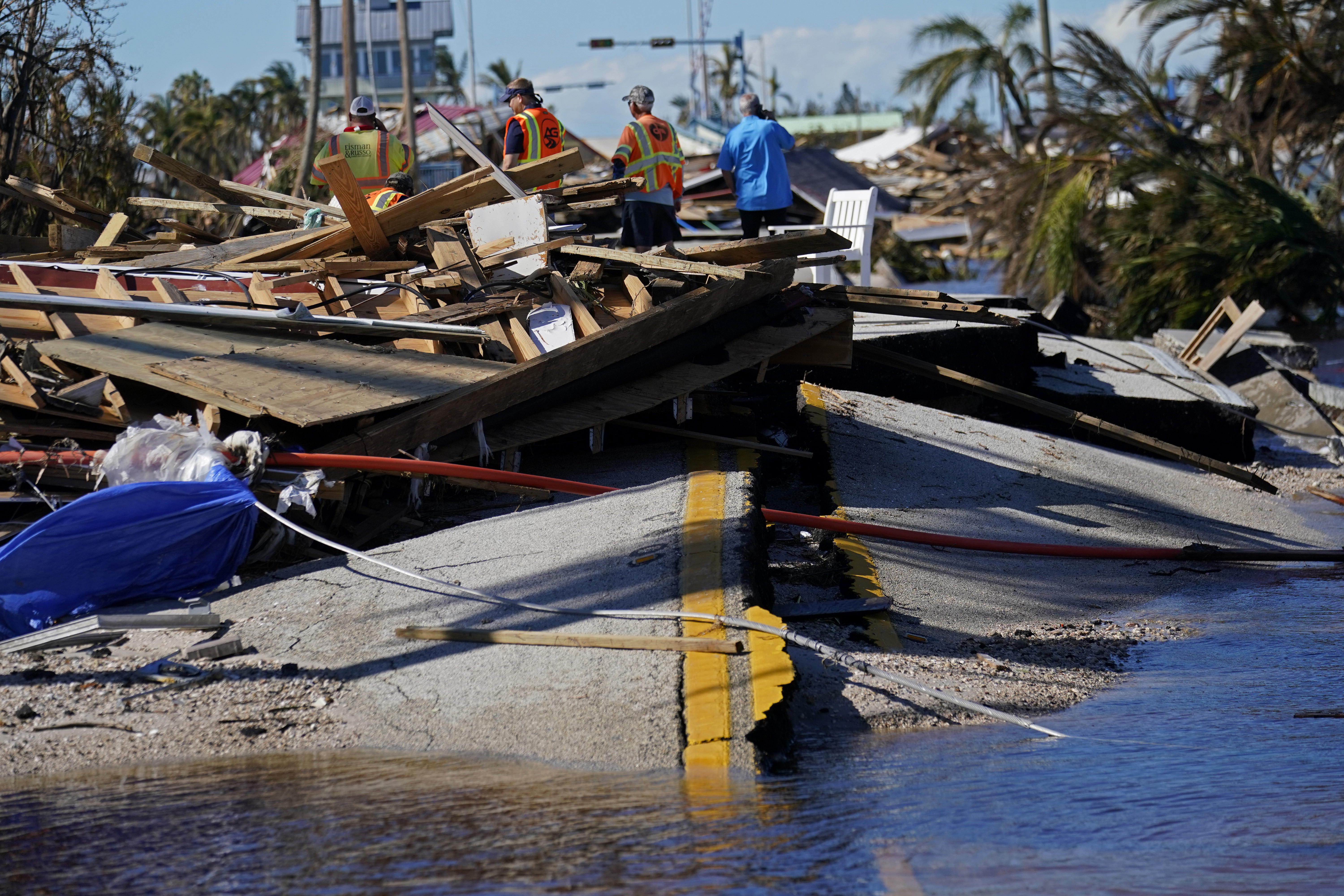 Florida Gov. Ron DeSantis said the Florida Department of Transportation is taking the lead in reconstruction efforts for the bridge and that the agency began moving dirt to Pine Island on Monday.

FDOT deployed 130 trucks to begin work on the bridge’s temporary repair, which basically means dumping dirt and sand over areas that remain flooded until it is passable. DeSantis added that “this is not necessarily going to be a bridge where you want to go 45 miles per hour, maybe, but at least you have connectivity to the mainland.”

At the Sanibel Causeway, which DeSantis said will “require more TLC” than the Pine Island project, he said most of the damage was near the causeway islands and not on the main stretches above the water.

“I can’t say… exactly how long that will take,” DeSantis said, adding that he prefers a temporary bridge to a ferry system for island residents.

The two bridges had pre-storm federal sufficiency ratings of less than 80 on a 100-point scale, making them eligible for federal bridge rehabilitation funds, but greater than 50, the mark below which a bridge is eligible for replacement with federal funds.

Steve Williamson, a former director of engineering for the Army Corps of Engineers, who currently works as the city manager for Key Biscayne, a barrier island near Miami connected to the mainland through a system of bridges and causeways. He said the state’s top priority right now for the Sanibel Causeway would be to get the best possible engineers on the ground as quickly as possible.

“As soon as you arrive [the bid] granted, you put people on the ground,” Williamson said.

FDOT did not immediately provide a copy of the bid proposal, which Williamson was able to view publicly Monday before a publicly viewable link to the proposal went down.

Williamson said he was able to read the state’s request for bids for the Sanibel Causeway and that “most of it was procurement bureaucratic jargon.” The request did not include details on how to rebuild the bridge, but was more about bringing in qualified people, he said.

Williamson said most of the temporary bridge construction solutions he worked on in the Army Corps it would not necessarily provide an immediate solution for the Sanibel Causeway. Options, he said, would be a temporary structure over a damaged highway, a boat-supported bridge or a temporary aluminum bridge.

“That would be very difficult to build, with something like Pine Island you could use a [aluminum bridge] but I don’t think that’s a solution at Sanibel,” Williamson said.

FDOT Secretary Jared Perdue said the main problem with the Sanibel Causeway involves the land that was washed away along the highway, a similar problem facing Pine Island but on a larger scale. Perdue said a stability analysis of the bridge will be performed before the bridge and road approaches are repaired.

“The Pine Island Bridge is well on its way to completion. I am confident that we can provide the same level of service to the Sanibel Island community,” Perdue said in a statement.

FDOT said “all accessible state bridge inspections have been completed,” while inspections continue at locally owned bridges. They said a temporary fix for the Sanibel Island embankment would be incorporated into long-term permanent repairs after the temporary embankment is open to traffic.

In addition to Pine Island and Sanibel, Lee County officials said four other bridges also remain closed as of Tuesday, though other roads are open to allow traffic and emergency services to move through the Fort Myers area. . Other bridges further inland remain closed due to flooding, although I-75 is open.

Once Pine Island reconnects to the mainland, DeSantis said gas stations and the Publix supermarket on the island will be able to reopen. Areas in the northern part of the island, in particular, suffered less storm surge damage than areas further south.

“As soon as the bridge is open, Publix will open,” DeSantis said. “There’s a beautiful 7-Eleven and it’s closed because I don’t think they have adequate power.”

But the governor was much briefer on when Sanibel Island residents will have access to the mainland, even though FDOT said its goal is to complete a temporary causeway by the end of the month.

“I can’t tell you when the temporary bridge to Sanibel will be done,” DeSantis said. “The places in the water, those sustained places. I think we will be able to have a solution there in the not too distant future.”