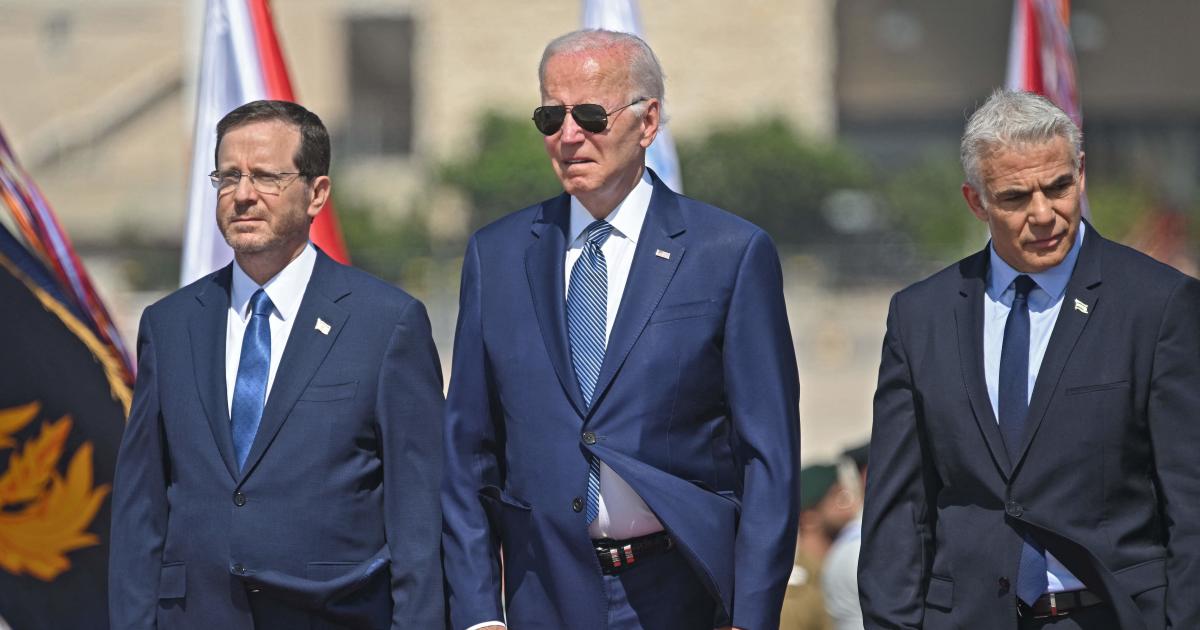 Washington — President Biden begins the first visit to the Middle East of his presidency with a monumental task: reassure restive Israeli and Saudi officials that he is committed to preventing Iran from becoming a nuclear power.

Biden begins the visit Wednesday with a three-day stopover in Israel, where officials say Iran’s rapidly evolving nuclear program is high on their agenda for talks with the US president. Biden made reviving the Iran nuclear deal, brokered by Barack Obama in 2015 and abandoned by Donald Trump in 2018, a key priority when he took office.

But indirect conversations for the United States to re-enter the deal have stalled as Iran has made rapid progress in developing its nuclear program. That left the Biden administration increasingly pessimistic about resurrecting the deal, which placed significant restrictions on Iran’s nuclear program in exchange for sanctions relief.

Mr. Biden landed in Israel on Wednesday and will be officially received during a ceremony at Tel Aviv’s Ben Gurion Airport. He will receive a briefing on Israel’s Iron Dome and Iron Beam air defense systems and then head to Jerusalem for a wreath-laying ceremony at Yad Vashem, Israel’s memorial to the victims of the Holocaust in World War II.

In addition to meetings with Israeli and Palestinian officials, he is scheduled to receive Israel’s Presidential Medal of Honor and visit American athletes participating in the Maccabee Games, which includes thousands of Jewish and Israeli athletes from around the world.

Mr. Biden, in a Washington Post op-ed published on Saturday, linked to Trump for abandoning the nuclear deal that Britain, France, Germany, Russia, China and the European Union also signed. But Mr. Biden also suggested that he still clings to at least a modicum of hope that the Iranians will deliver again.

“My administration will continue to increase diplomatic and economic pressure until Iran is ready to return to compliance with the 2015 nuclear deal, as I remain willing to do,” he wrote.

Israeli officials, briefing reporters ahead of Biden’s departure from Washington on Tuesday, said the United States and Israel would issue a wide-ranging “Jerusalem Declaration” that would take a strong stance on Iran’s nuclear program.

The declaration commits both countries to use “all elements of their national power against the Iranian nuclear threat,” according to an Israeli official who spoke on condition of anonymity to preview the declaration.

The official said the Israelis would stress to Mr. Biden their view that Iran has calculated that “time is on its side” and is reluctant to make concessions. The latest round of indirect negotiations by the Biden administration with Iran in Doha, Qatar, late last month ended without success.

Separately, Mr. Biden and Israeli Prime Minister Yair Lapid issued a joint statement on Wednesday announcing that the two nations were launching a new high-level strategic dialogue on technology. The association will focus on the use of emerging technologies, including artificial intelligence and other technology-based solutions, to address global challenges such as pandemic preparedness and climate change.

The White House has also been frustrated by repeated Iranian-sponsored attacks on US troops based in Iraq, though the administration says the frequency of such attacks has dropped sharply in the past two years. Tehran also sponsored Houthi rebels in a bloody war with the Saudis in Yemen. A UN-brokered ceasefire has been in place for more than four months, a fragile peace in a war that began in 2015.

Separately, White House national security adviser Jake Sullivan said Monday that the administration believes Russia is turning to Iran for hundreds of unmanned aerial vehicles, including weapons-capable drones, for use in its ongoing war in Ukraine.

The Saudis, like the Israelis, have been frustrated that the White House has not abandoned efforts to revive the Tehran nuclear deal. Mr. Biden heads to the Saudi port city of Jeddah on Friday to meet with King Salman and Crown Prince Mohammed bin Salman, widely known by his initials MBS, and to attend a meeting of the Gulf Cooperation Council, where Iran’s nuclear program. it’s on the agenda.

Also looming over the Saudi visit is the president’s strained relationship with the crown prince.

As a candidate for the White House, Democrat Biden said he would seek to make the kingdom a “pariah” nation for its human rights abuses. The relationship was further strained when last year Biden approved the release from a US intelligence report that found MBS likely approved of the 2018 murder of US journalist Jamal Khashoggi.

The president will arrive in Saudi Arabia, one of the world’s biggest oil producers, at a time when gasoline and food prices are soaring around the world, fueled, in part, by the Russian invasion of Ukraine. White House officials and energy analysts say there is little expectation that the Saudis or other OPEC+ members will provide relief.

Another factor in the pursuit of a de-escalation in the Saudi relationship is the administration’s growing concern that the Saudis could move closer to China and Russia amid tensions with the United States.

Aaron David Miller, a senior fellow at the Carnegie Endowment for International Peace and a former US State Department official, said Biden expects to visit Saudi Arabia “as if he expected a pipeline operation.”

“You have a president who is terribly conflicted about this meeting,” Miller said. “You can’t even acknowledge, in all of his public comments, that he won’t even meet Mohammed bin Salman.”

But Israeli officials are cautiously optimistic that Biden’s visit could be a watershed moment on a slow path toward normalizing relations between Israel and Saudi Arabia. Mr. Biden will be the first US president to travel directly from Israel to Saudi Arabia, and the two nations’ shared enmity over Iran has led to subtle cooperation.

Earlier this week, opposition leader Benjamin Netanyahu praised the crown prince’s “contribution” to the Abraham Accords, declarations of diplomatic and economic normalization signed by Bahrain, Israel, the United Arab Emirates and the United States while Netanyahu was Prime Minister.

Israel is expected to hold new elections in the fall after the fragile coalition government led by Naftali Bennett collapsed last month.