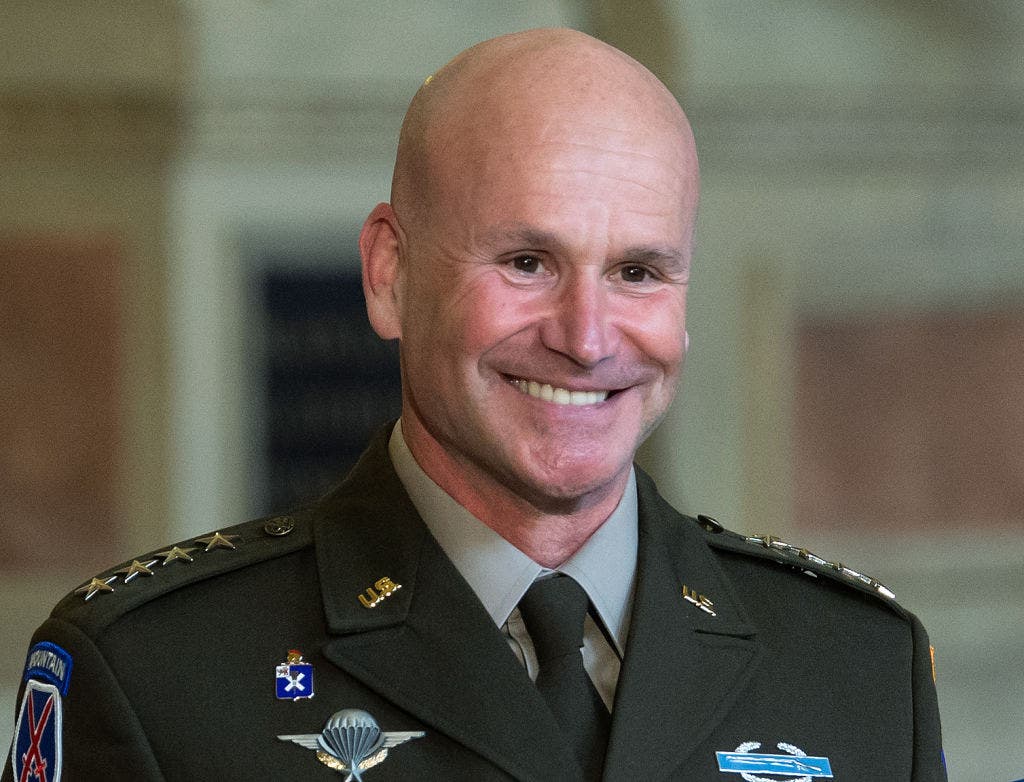 Just one day after a historic two-day NATO summit in Madrid, the alliance swore in a new Supreme Allied Commander and head of the US European Command (EUCOM).

At a change of command ceremony in Stuttgart, Germany, General Christopher Cavoli, the four-star American general who has led the US military in Europe, raised his right hand and was given command of an expanding NATO that will soon have 300,000 troops under his watch.

It will also have two new member states, Finland and Sweden, once NATO’s 30 member parliaments vote to include them.

US Army General Christopher G. Cavoli smiles as he is awarded the Bavarian Order of Merit by the Bavarian Minister-President.
(Sven Hoppe/Image Alliance via Getty Images)

“Chris knows Europe better than any officer alive in uniform today. Chris is literally designed to lead EUCOM,” Gen. Mark Milley, Chairman of the Joint Chiefs of Staff, said during the ceremony, joined by Secretary of Defense Lloyd Austin.

“I think future generations will remember how we all served the cause of freedom at this pivotal time,” Austin said during the ceremony. “Everyone is inspired by the resilience and courage of the Ukrainian people. They will be encouraged by the way nations of good will united against Putin’s aggression.”

General Cavoli’s father served in the Army for 32 years, retiring as a colonel. Christopher was born in Italy on a US military base while his father was serving. He attended Princeton University and joined the Army as an infantryman with the 173rd Airborne Brigade in northern Italy.

“He grew up in Europe, has lived all over the continent, and is fluent in French, Russian and Italian. He reads Spanish and Portuguese. And he gets by and understands Polish and Ukrainian, which allows him to communicate directly with about half the population of Europe,” General Milley said.

President Biden during a press conference on the last day of the NATO Summit in Madrid, Spain, on June 30, 2022.
(Jakub Porzycki/NurPhoto via Getty Images)

General Cavoli served in Bosnia and fought with the 10th Mountain Division in Afghanistan. He commanded a brigade combat team in the 1st Armored Division. He commanded the 7th Army Training Group in Europe, was deputy commander of the 82nd Airborne Division and later the 25th Infantry Division.

He was director of the Russia Office in the Pentagon’s Joint Chiefs of Staff, in addition to obtaining a master’s degree in Russian studies at Yale University.

“He’s tough. He’s got combat experience. He’s smart and he has a deep understanding of Europe and Russia,” Milley said. “Chris Cavoli is the right officer in the right job at the right time… We are at that pivotal moment, a transitional period in history. And EUCOM makes it important. You are upholding the rules-based international order… You’re protecting America’s vital interests. And, more importantly, you’re preventing great-power war.”

General Cavoli will oversee some of the biggest changes in military posture in Europe since World War II. Since the Russian invasion of Ukraine in February, the Pentagon has deployed or expanded deployments of more than 20,000 US troops to Europe.

“Dwight Eisenhower said that he and the leaders of the alliance had shared ‘the same passionate hope to serve free humanity and make it safe.’ We still share that hope. We still keep that flame burning,” Austin said.

Prime Minister Boris Johnson during a press conference on the last day of the NATO Summit in Madrid, Spain, on June 30, 2022.
(Jakub Porzycki/NurPhoto via Getty Images)

At the NATO summit in Madrid, President Biden announced that the United States will establish an army headquarters in Poland that will rotate to protect NATO’s eastern flank. A rotational combat brigade will be sent to Romania, two squadrons of F-35s to the UK, two naval destroyers to Spain and a short-range air defense battery to Italy.

Another 625 servicemen will head to Germany to operate air defense missile systems.

Ukraine has four HIMARS, or M142 High Mobility Artillery Rocket Systems, which are lightweight multiple rocket launchers developed in the late 1990s for the US military. They are in use right now and will have another four by the end of July, according to senior defense officials.

Jennifer Griffin currently serves as the National Security Correspondent for FOX News Channel (FNC) and is based in the Washington DC bureau. She joined the network in October 1999 as a Jerusalem correspondent.