Where did the Black Death start? DNA detectives find a key clue. 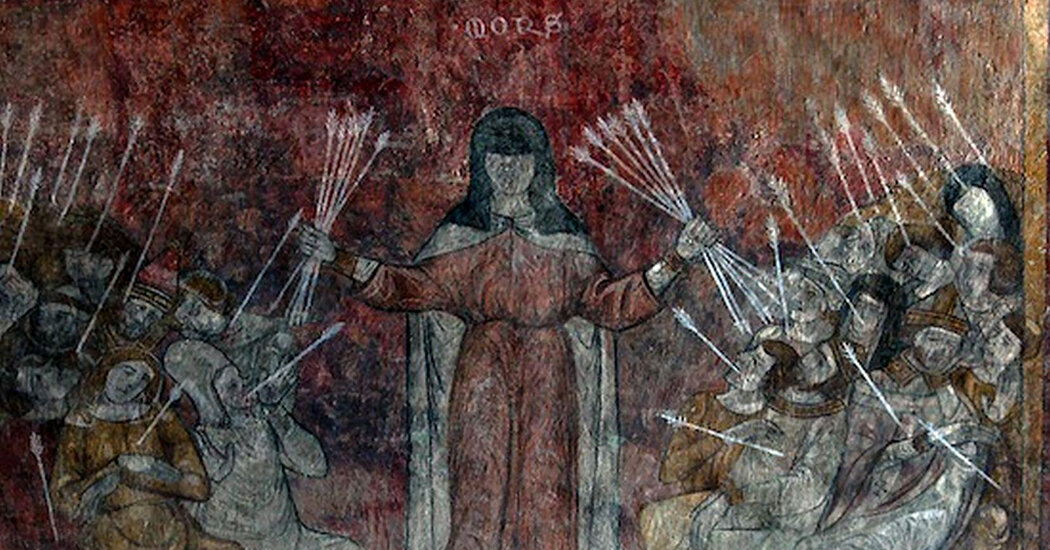 Where and when did the Black Death originate? The question has been asked for centuries and has given rise to a heated debate among historians.

Now a group of researchers report that they have found the answer in the tooth pulp of people buried in the 14th century.

Based on their analysis of preserved genetic material, the researchers report that the Black Death arrived in 1338 or 1339 near Issyk-Kul, a lake in a mountainous area west of China in what is now Kyrgyzstan. The plague first infected people in a small nearby trading settlement eight years before it devastated Eurasia, killing 60 percent of its victims.

The research was led by Wolfgang Haak and Johannes Krause of the Max Planck Institutes for Evolutionary Anthropology and the Science of Human History in Germany, as well as Philip Slavin of the University of Stirling in Scotland, who described his findings Wednesday in Nature.

What is known as the Black Death, named for the black spots that appeared on the victims’ bodies, is caused by a bacterium, Yersinia pestis, which is transmitted by fleas that live on rodents. The disease is still present today, transmitted by rodents on every continent except Australia. But infections are rare because hygiene is better. Infections are easily cured with antibiotics.

The 14th-century plague was actually the second great epidemic of Y. pestis — the first was Justinian’s plague in the 6th century, said Mary Fissell, a medical historian at Johns Hopkins University. But the Black Death is the best known and is considered one of the deadliest epidemics in human history.

His terrors were narrated by Giovanni Boccaccio, an Italian writer and poet who survived the plague when it hit Florence. The illness, he wrote“showed its first signs in both men and women by means of swellings either in the groin or under the armpits, some of which grew to the size of a common apple and others to the size of an egg, and people called them buboes”, which became known as “signs of imminent death”.

Historians traced the path of the epidemic: It apparently started in China or near China’s western border and moved along trade routes to Europe, North Africa and the Middle East.

But Monica H. Green, an independent academic and medical historian who was not involved in the new article, noted that historians could never answer the question they raised: Was it really Yersinia pestis that caused this massive pandemic?

“We hit a wall. We are historians and we deal with documents,” said Dr. Green.

She vividly remembers meeting a paleopathologist 20 years ago who had been studying leprosy, which leaves visible marks on skeletons.

“When will you make the plague?” Dr Green asked. She said the paleopathologist replied that they couldn’t study plague because a disease that kills people so quickly doesn’t leave traces in bones.

Now that impasse has been overcome.

The search for the origin of the plague “is like a detective story,” said Dr. Fissell, who was not involved in the new study. “Now they have very good evidence from the crime scene.”

The search dates back more than a decade, when the group that led the latest study surprised archaeologists with your report that they could find DNA from plague bacteria in the skeletons’ teeth.

14th-century Londoners knew the Black Death was coming, so they consecrated a graveyard in advance to be prepared for its victims. The bodies were exhumed and are now in the museum of london. The situation was ideal because these victims not only came from a plague graveyard, but the date of their death was known.

“The technical skill that has gone into this work has been amazing,” he added.

Since the London study, the group has analyzed genetic material from plague victims elsewhere, building a DNA family tree of variants of the plague bacterium. He and other researchers reported that the tree had one trunk and then suddenly seemed to explode into four branches of strains of Y. pestis whose descendants are found in rodents today. They named the event the Big Bang and began a search to find when and where it occurred.

Historians proposed various dates, ranging from the 10th to the 14th century.

Dr. Slavin, a newcomer to the group that analyzed plague victims in Kyrgyzstan, said one of his dreams was to solve the riddle of the origins of the Black Death.

“I was aware of two Christian cemeteries in Kyrgyzstan and started to investigate,” he said.

To his astonished delight, he discovered that hundreds of tombstones were precisely dated. Some had inscriptions saying, in an ancient language, Syriac, that the person had died of “pestilence.” And the population death rate had skyrocketed in the year those people died.

“That caught my attention because it wasn’t just any year,” Dr. Slavin said. It was 1338, “just seven or eight years before the Black Death reached Europe.”

“We can’t ask for much more than to have headstones with the year on it,” he said.

The researchers found plague DNA in the teeth of three people whose tombstones said they had died of “pestilence.”

The group also reports that the rodents that transmitted the bacteria to those victims were groundhogs. Groundhogs in that area today have fleas that carry a type of Y. pestis that appears to be derived directly from the ancestral strain.

And the researchers report that the strain in Kyrgyzstan comes from the trunk that exploded into four strains. It is the beginning of the Big Bang, proposes the group.

If they are correct, Dr. Fissell said, it appears that the Big Bang occurred just before the Black Death in Eurasia, indicating that the spread of the plague was likely due to trade routes and not, as some historians have suggested, through military actions for a century. earlier.

Dr. Green and other historians have proposed that the Big Bang occurred when Mongols in the early 13th century spread bacteria. But if that had been the case, the bacteria in Kyrgyzstan would have been from one of the branches and not the ancestral strain.

“Those battles in the 1200s are pretty irrelevant,” said Dr. Fissell.

Dr Green said she was convinced the group had found plague victims in Kyrgyzstan. But she said the evidence now available was insufficient to justify her bold claims.

For now, he said, the detective work has turned up an important lead.