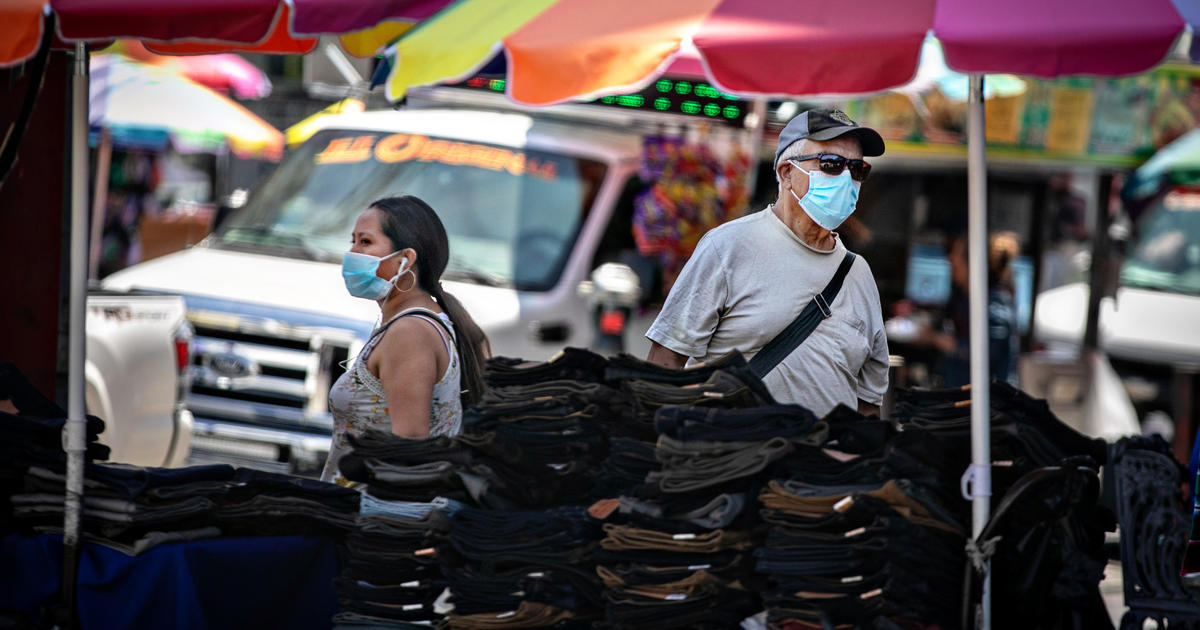 More than half of Americans now live in communities where the Centers for Disease Control and Prevention recommends the use of masks indoors and other measures to slow the rise of COVID-19, according to figures released Thursday by the agency.

Fifty-five percent of the country’s population now lives in areas of “high” community levels of COVID-19, up from 32% last week, according to the CDC. weekly update. Another 30% live in counties considered “medium” risk.

At “high” levels, the CDC urges Americans to wear masks and “consider avoiding non-essential indoor activities in public where you might be exposed,” among other changes they recommend to stem a wave of infections and hospitalizations. The threshold also triggers additional restrictions on a variety of federal facilities, though many local health officials have so far been wary of re-imposing mandates.

Earlier this year, the CDC introduced its measure of community levels of COVID-19 as a way to calculate the risk posed by the disease based on in a formula that takes into account both reported infections and hospitalizations.

Federal health officials assess that the national COVID-19 case count is likely significantly underestimating the true spread of the disease, given the growing proportion of Americans turning to rapid home tests to diagnose their infections.

However, hospitalizations for COVID-19 have also increased.

For the first time in weeks, the CDC said its national forecast forecast a “likely increase” nationwide in the rate of new hospital admissions for COVID-19.

Federal data sample most regions are seeing an acceleration in COVID-19 hospitalizations many times worse than this time last year.

In the West, Arizona, California, Hawaii and Nevada recently saw the pace of new hospitalizations among those 70 and older eclipse the worst rates seen during last year’s late-summer surge. Northeastern regions have been experiencing similarly high rates. This age group is the most vulnerable to severe illness and death from COVID-19.

The ten most populous counties that moved from “medium” to “high” this week include:

Federal health officials have been urging Americans to take precautions to slow the rapid spread of Omicron’s BA.5 subvariant, which is responsible for about two-thirds of cases, according to CDC estimates.

“It has a growth advantage compared to previous Omicron sub-variants. It substantially evades the neutralizing antibodies induced in people by vaccination and infection. But fortunately for us, the effectiveness of the vaccine against serious disease is not substantially reduced or at all compared to other Omicron sub-variants.” Dr. Anthony Fauci, Chief Medical Advisor to the President, told reporters this week.

Still, CDC scientists and other researchers as concluded concluded that BA.5 mutations move it further away from the parent strain of the virus “than any other variant, including BA.1.”

That fact is part of why the Food and Drug Administration said earlier this monthafter a meeting of his outside vaccine advisers, that he would tell vaccine manufacturers to redesign their shots to accommodate the BA.5 variant and its closely related BA.4 cousin.

Those vaccines could arrive as soon as October, though the Biden administration has warned that some Americans will need to wait longer to receive the updated shots.

“The full 105 million doses won’t show up on day one, so there’s going to be a launch period here where I expect some Americans will get it in October if everything goes on schedule, others will get it in November or December,” he said. Dr. Ashish Jha, the White House’s top COVID-19 official, told reporters.

However, Jha and Fauci said that federal health authorities are considering allowing Americans who are already hardened to renew their protection amid the current wave.

“The FDA is looking at this issue right now and trying to figure out if they’re going to open it up, and then we’re going to have a decision on it relatively soon,” Jha told “CBS Mornings” on Wednesday.

Until now, only Americans over the age of 50 or those with compromised immune systems can get a second booster shot of the COVID-19 vaccine. Of the eligible for the second booster, less than a quarter received the additional dose.

“In my opinion, everyone over 50, if they haven’t had a shot this year, if it’s been six months or more, they should go out and get that shot. To me, that’s a no-brainer,” Jha said.

CDC Director Dr. Rochelle Walensky also hinted this week that the agency was considering changes to its COVID-19 guidance amid the rising tide, telling reporters that “as the virus continues to evolve, our response and guidance must evolve with it.”

Among those that could soon see changes is guidance for nursing homes and other health care facilities.

“We are in the process of working on updates that have been pending for a while, but we are working on updates that will address, in addition to masking, a couple of other areas in the CDC guidance for nursing homes specifically,” the CDC said. . Kara Jacobs Slifka told attendees of a recent call organized by the Centers for Medicare & Medicaid Services with nursing home stakeholders.

Slifka said the agency had changes “in the near future” on the issue.

“I think we’ll continue to move our recommendations along with where we’re trying to get to with this pandemic, that this is a long-term thing. But we need to consider where we are in terms of what the community is transmitting.” and what infections and vaccination status,” Slifka added.