A texting lifesaver during a tough time 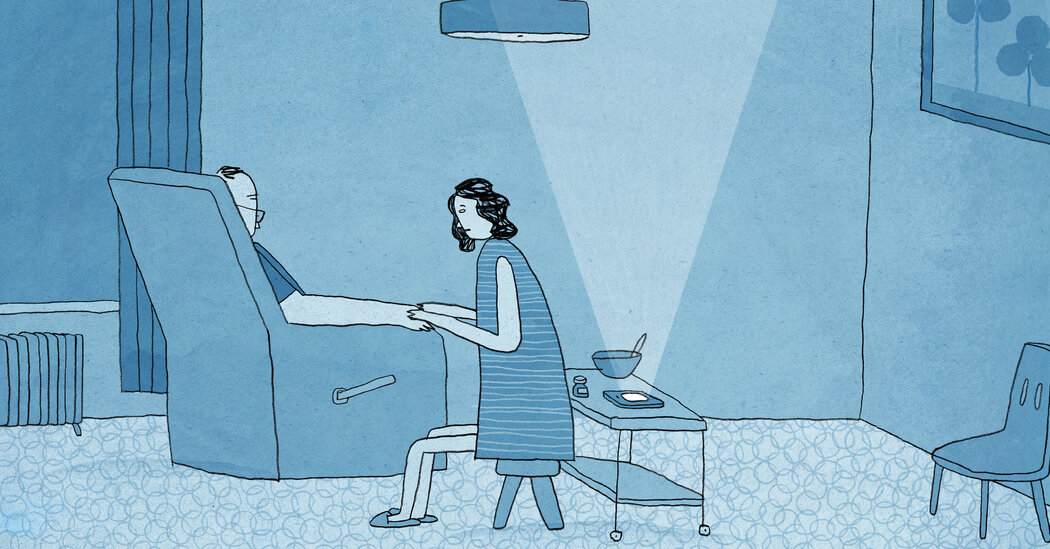 I chose my university based on the vibes of people in the school’s accepted students Facebook group. This blonde guy commented on my introduction post that he also liked one of my favorite artists, and my friend told me that was proof enough: if there is one, there will surely be more.

My father thought making a decision based on “vibes” was a bit silly, but he supported my choice. This was on our trip to New Hampshire in August, when he told me about his freshman year of college and all the nicknames his new friends gave him. He was so excited for me. That’s when he found out he had pancreatic cancer, so we started spending more time together.

My freshman year of college, during the first year of the pandemic, was horrible and isolated and it was all about making the most of it; my classes were online and I ate soggy takeout from the dining room on my dorm floor with my two friends. I felt guilty for being away from my father and not even enjoying it.

That spring I used Tinder for a few weeks because I was embarrassed that I hadn’t experienced Big Love yet. I hooked up with this blond guy, and we had a dry exchange about our hometowns, then we stopped talking; I forgot who didn’t reply to whom.

Summer consisted of baseball games with my father and days at the beach almost forgetting that he was sick. But then the summer ended and I was sent back to school.

Fall of my sophomore year, Covid restrictions relaxed. I devoured my time in cafes. I saw a blond guy in front of the library when he was on the phone and again in my dining room while his friend was playing Taylor Swift. I went out to parties in tiny tops. I saw him selling records in the yard for his radio show and laughed at a joke he made while he was clumsily trying to sell someone else’s album.

I called my dad, who was recovering from a big, botched surgery, and told him my classes were making me dizzy. He was glad. He wanted him to be in school, so he was, knowing that he had my mother nearby. Although they were divorced, she had been by her side since her diagnosis.

But then Thanksgiving came around, he was hospitalized, and it became clear that taking it day by day now had a time limit. There was nothing left but palliative care. I arranged remote finals and booked a flight home to hold his hand.

My life became spending time with my father and also waiting for him to die. I crushed ice, filled syringes and watched him sleep. I listened as my mother directed her nurses and whispered to my sister where her cat would go. I ate takeout and more ramen than ever in college. I chose my face. The four of us watched movies, listened to music, made jokes and cried a lot. I did not sleep. Everything was consuming.

On Christmas Eve, I posted a song that I liked on my Instagram story. It felt dishonest to post something so insignificant; He was supposed to be in an anticipatory duel. That blond boy, the one from the radio show, responded by saying that he liked the song and asking what he was doing.

“Watching a movie,” I replied. I didn’t mention the hospital bed in front of the TV.

He told me about his family’s traditions, which sounded lovely; They sounded like things my family used to do.

I was worried that each message would be the last. And then I would have to sit by my father’s bed and fill syringes and adjust pillowcases and cry without distraction. I felt horrible shame that I was taking advantage of his two months in hospice by having a flirty text message. But our texts made me laugh.

When my father died, they showered me with condolences. The radio guy was the only person I responded to. Something about an article I’d read, the new Big Thief single, or whatever silly thing we could think of. He sent me a voice memo to tell a story too long to text, and if calling him hadn’t felt like breaking some texting rule, he would have done it right then just to hear more of the voice. of the.

The guy from the radio bought me a coffee for when we got back to campus. It would be a week and a day after my father’s death. I flew back to school, armed with photos and memorabilia from my father’s house, including a jacket of his that I had taken during one last hurried sweep for essential keepsakes.

I stood in the bathroom for 10 minutes before our coffee date and felt like throwing up. I was worried about the sound of my voice and the pimple on my forehead. But we stayed there drinking lattes for three hours, and I liked the way he laughed. Leaving the cafe, I looked at my father’s coat and noticed that the zipper was broken. The only coat I had for winter was my late father’s torn one.

I told the radio guy it was broken and he asked me why I was using it at the time. I didn’t have an answer for him. We didn’t hug, but we stayed outside the cafe for another half hour while I shivered.

Our first kiss was on our third date in a snow storm. I hesitated to kiss him because that would mean that I was starting something that I could lose. A few days later I told him that I was terrified to hang out because my father had just died and everything scared me.

I don’t think he had a clue what to say, but he told me he was fine. She said that she was sorry. Then she said something that made me laugh.

Everything about him felt light, like he was holding my hand and taking me to a world where people didn’t die and everything was interesting. But he didn’t feel like my world, so I stood there, torn. I needed my pain, but I couldn’t take it either.

My mother is devotion itself. She was the one who accompanied my father to every doctor’s appointment, the one who sat with him in every hospital, the one who made him laugh, the one who held his hand. My parents ended up getting back together just in time to lose each other. While we were cleaning out my father’s basement, she told me that she should marry someone she can laugh with. She said that’s what she always had with my dad.

The radio guy started showing up everywhere and I started looking for him. Between classes, he would show up to greet me and escort me to the next one. He would bring me the best focaccia on campus, or we would go for coffee. He played guitar for me in his bedroom, because of course that guy plays guitar, and I listened, painfully aware of the trope we were both playing in and wondering if it all felt too good.

I worry that I am accelerating my pain, rushing it, gluing together the parts of me that have cracked so I can continue, trying to “as before” and realizing that it doesn’t exist. I worry that someone like this boy I care about will be careless and tear me apart.

My pain doesn’t seem right to me; It’s a bit blurry when I look at it in the mirror. He is not dressed in black; he is wearing my boyfriend’s sweatshirt. My pain is imagining the way my father would make fun of my boyfriend’s name, ask him about his favorite band and tell him not to hurt me. My pain will miss my father for the rest of my life and he will prod me every time something is good, telling me to worry, because anything can fade.

At the beginning of meeting him, there was a thunderstorm in the middle of the night, and I hate thunder. The radio guy told me that he wasn’t going anywhere, which made me feel safe and a little sick. Even though she was scared and wanted him there, she still felt like she knew more than he did. I didn’t think I had any right to declare that she was going to stay. There was no insurance, and that was worse than thunder.

But he’s not going anywhere for now. I’m home for the summer and I miss him no matter how much we FaceTime each other. We have told our mothers about each other. I know he asks for a dirty chai when he needs to study. He has seen me fold my clothes, and I am still terrified of the loss.