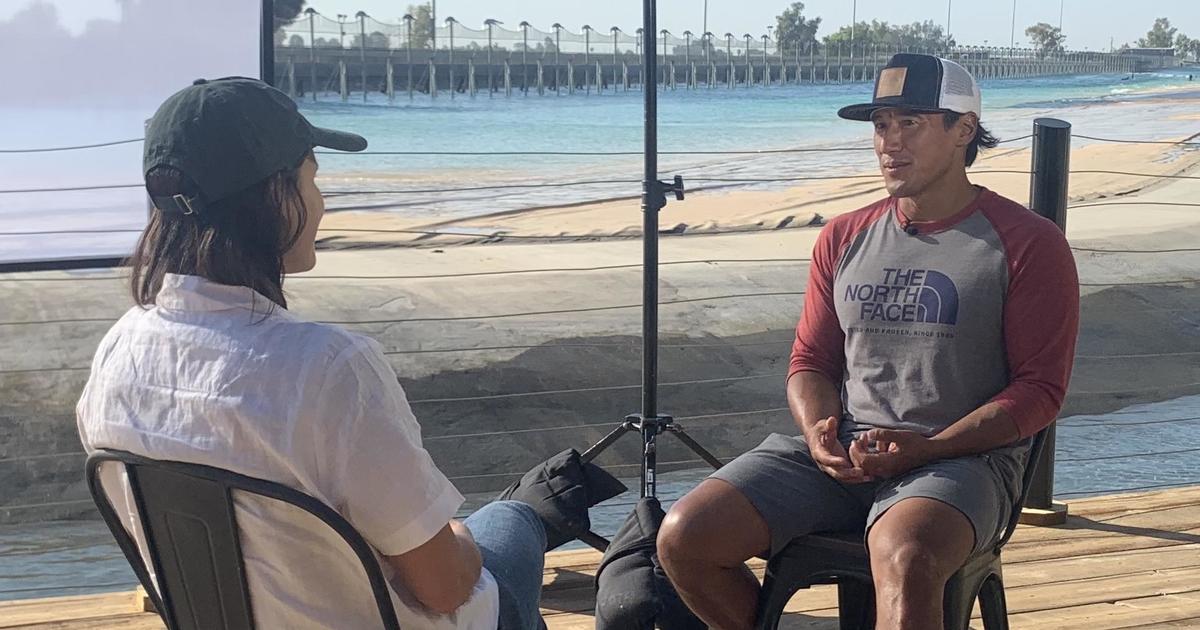 Jimmy Chin is often more comfortable thousands of feet up a rock face or dangling from the end of a rope with a camera in hand. But when the professional mountain climber speaks to CBS News on a bright late-summer morning at California’s Surf Ranch, his mind is on other things, like the six-foot barrel that stretches a perfect 700 yards across the wave pool. .

“It’s like a perfect wave, and there’s a lot of opportunity for progression here,” he tells CBS Mornings’ Lilia Luciano at the man-made wave basin, the brainchild of legendary surfer Kelly Slater.

The wave pool is a stark departure from the mountains and cliffs that have made Chin one of the most recognizable faces in adventure sports, thanks to his 2019 Oscar-winning documentary “Free Solo,” which chronicles the search for the climber Alex Honnold to conquer El. Capitan without ropes or other climbing aids.

By their nature, extreme sports are fueled by adrenaline, and ultimately, when faced with life-threatening danger, Chin says, top practitioners enter a special state of mind.

“It’s that transcendent experience where you’re in a state of flow, where everything else fades away and you’re in a thoughtless space and the world slows down. And it’s just this amazing experience. And that’s an addictive feeling.”

Living in the face of that danger gives adventure athletes a deep relationship with the forces of nature, he says.

“You know, obviously I love being in the wild places and the ocean, to me, has a lot of those raw elements that I love. There’s a lot of raw power and you’re at the mercy of Mother Nature.”

His new series explores what it means to be at the mercy of nature. Documenting the mishaps and accidents, or just misjudgments about where that advantage lies, of some of the world’s greatest extreme athletes, “Edge of the Unknown with Jimmy Chin” looks at the defining incident that could have ended the life of each, but instead changed. them forever.

From a big-mountain snowboarder caught in an avalanche to a kayaker trapped underwater at the base of a 60-foot waterfall they’ve just fallen through, the stories are as dramatic as they are horrific.

But for Chin, these moments are moments of growth: the moments when athletes adapt, reassess and get back on the mountain or back in the kayak.

“The real story is how they deal with challenges and life-changing challenges… turning points in their lives. That, to me, is really inspiring.”

But sometimes, like this brilliant morning at Surf Ranch, he also enjoys the pressure as he explores the water sport.

“I’m not a professional surfer. I’ve been a professional rock climber for over 20 years, but this is something I love to do and I love that progression. I’m still on the steepest part of the learning curve, so it’s very, very fun for me.”

“Edge of the Unknown with Jimmy Chin” airs on National Geographic Channel Tuesdays at 10pm ET/PT, with all episodes available to stream on Disney+.